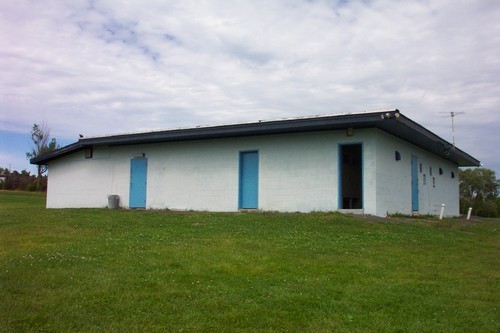 The Greenville Drive-In opened on June 18, 1959 with Steve Cochran in “Quantrill’s Raiders” & Clifton Webb in “The Remarkable Mr. Pennypacker”. It is a single screen, originally with a 500 car capacity. It was put up for sale in 2004 and was under new management in 2007. The drive-in was scheduled to open for the season in June of 2013 but due to financial difficulties it did not open until July. They have a buy a brick program now under way to convert to digital projection. It was closed in 2014, awaiting further funding to buy digital projection equipment.

Taken over by new operators in April 2015, it was equipped with digital projection, reopening July 4, 2015. Closed during winter months, it reopens the first week of May. It now operates with a reduced car capacity for around 250. The snack shack offers locally produced products and there is a beer garden offering local brews. 2019 marks the Greenville Drive-In’s 60th Anniversary when it reopens on May 11.

This drive-in did not reopen in 2014, and should be listed as closed.

The current owners are trying to raise funds to convert to digital projection so they can open for the 2015 season. They were closed in 2014 sadly

The Greenville Drive-In has been under new management since April 2015. The digital conversion was completed in June and was open to the public every week from July 4th 2015 til last week in October. It will re-open (along with its new biergarten) first weekend of May 2016. It is very much open.

This should be listed as open not closed.

One of the owners of the Malta Drive-In, Ed Caro, managed the Greenville before buying the Malta in 1988.

From the old GreenvilleDriveIn.net About Us page in 2014, now stored at the Internet Archive:

In April 1959, Peter Carelas owner of Carelas Restaurant and Grill, began construction on The Greenville Drive-in. The theatre was originally designed to hold 400 cars, was fitted with the latest in projection and sound equipment and was one of 6200 theatres across the country. (The capacity was 550 in the International Motion Picture Almanac.)

… Our screen measures 85 feet wide and stands 5 stories tall which gives everyone a great view of the action. The Drive-in thrived through the 60’s, 70’s and 80’s …

In 1988, local business owner Mark Wilcox and 10 others formed what is now known as the Greenville 11. … The Greenville 11 jointly purchased the Drive-in and saved it from land development.

Mark Wilcox operated and managed the Drive-in through the 2006 season. During Mark’s time in operations, the drive in saw the switch from wired speakers to FM sound …

2007 was a year of sadness, after 38 consecutive seasons the Greenville Drive-in closed. In 2009, Don Brown and Patricia Creigh reopened the Drive-in for the season. Due to an extreme amount of rainy days and nights, the Drive-in was only open a few weekends. The Drive-in was again closed for the 2010 and 2011 seasons.

Sounds like maybe that 1988 crisis was when Ed Caro left. As mentioned above, the Greenville was closed all of 2014.

Current owners Leigh Van Swall and Dwight Grimm ran a modest but successful Kickstarter campaign in 2015. Grimm told Catskill Eats, “We’re trying not to be so much a straight-up movie theater, but more of an event venue with movie-showing capabilities.” They finished their 2017 season in mid-October.