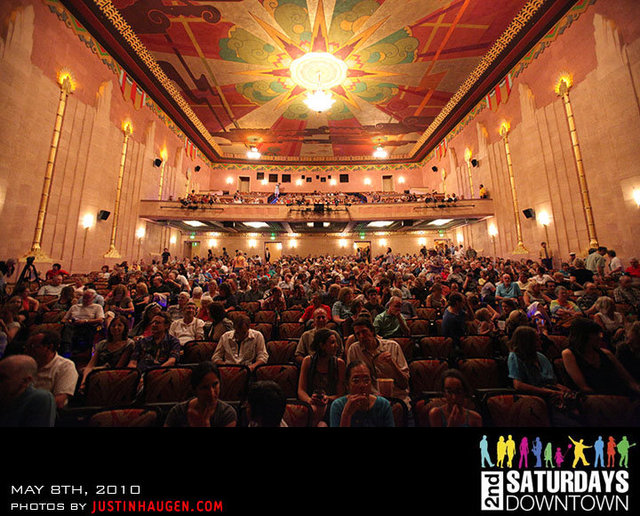 The Fox Theatre was built from August, 1929 to 1930, designed by architect M. Eugene Durfee for movies and vaudville. The theatre was going to be named the Tower, but in September, 1929, Fox West Coast Theatres acquired the property. The Fox Theatre opened on April 11, 1930, with 1,300 seats and the film “Chasing Rainbows” starring Bessie Love. This beautiful movie palace’s style is a unique blend of southwestern and Art Deco. There are Art Deco, Mayan, Egyptian, and Native American inspired decorations.

In 1974, due to competition from TV, multiplexes, and drive-ins, the Fox Theatre closed. The decades long closure did not dim the memories of those who once came here. Various efforts to revive the theatre were unsuccessful, but luckily the property was spared the wrecking ball. In 1997, the Fox Revival Committee began to look to ways to save the theatre. They organised the non-profit Fox Tucson Theatre Foundation. The foundation purchased the Fox Theatre in the Spring 2000. Thirteen million dollars was spent on the theatre’s rehabilitation and restoration.

The Fox Theatre was extensively restored. The original 1930 ticket booth had been modernised in 1940 and been replaced in 1956, but was recreated and today serves as a ‘will-call’ booth. EverGreene Painting Studio of New York restored the murals. The walls of the lobby and auditorium were repainted to their original colors. The lobby’s original terrazo floor was restored. The original carpet was replicated. Original chair fabric (with the same Art Deco pattern as the original chairs at Philadelphia’s Boyd Theatre) was discovered by a volunteer in a balcony seat and was replicated.

A building was taken over to the west at 27 West Congress Street. That building has ticket windows, concessions and rest rooms that connect to all levels (lower lobby, orchestra and balcony) of the historic theatre.

The Fox Theatre was added to the National Register of Historic Places in 2003. The movie palace reopened on New Year’s Eve, December 31, 2005. As of 2007, the movie screen is 38 feet wide and 16 feet six inches tall. The second 4 manual Wurlitzer console from the Brooklyn Paramount Theatre was installed in the Fox Theatre and organ pipes from the Hilbert Circle Theatre, Indianapolis, IN. Restoration of the organ was completed in April 2019.

After reading the May 7, 2009 post about the Fox I do hope that the residents of Tucson and the surrounding areas continue to support this theatre as they are lucky to have this restored theatre in their downtown area after many years of it being closed. It’s a true AZ cinema gem and needs to be respected, not neglected ever again! As I recall the City of Phoenix lost their Fox, but Tucson did the right thing by restoring and preserving their Fox!

The City of Tucson has taken over management of the facility from the non-profit organization that restored it. They reduced staff and utilize city resources to support the theater. There are only five paid positions and the rest are volunteers (myself amongst them). We do contract out to a local event staffing company as the bar, security and other positions have certain legal requirements.

More and more people are discovering the Fox as downtown slowly gets renovated. More shows are being booked here and each season we show different movies (tonight is ‘It’s a Wonderful Life’). Parking is free downtown after 5 PM and on the weekends so there is no reason not to come see this beautiful landmark.

Good work Obersenf, good luck to you and all.

From the 1940s a postcard view of Congress Street along with the Fox Theatre in Tucson.

From the 1960s a photo postcard view of Congress St. and the Fox Theatre in Tucson.

My dad was the projectionist there and I have some of the fondest boyhood memories of having the whole balcony to myself while he shot the flicks. I saw many like The Longest Day;Wait Until Dark;Cat Ballou and Bridge on the River Kwai. Also closed circuit broadcasts of the Indy 500, Muhammad Ali prize fights, El Cordobes' Corrida de Toros from Jaen,Spain and the Beatles D.C. concert. I donated a film splicer and I.A.T.S.E. Gold Card from my father’s local of which he was vice president.The Fox is truly a jewel in the crown of the Old Pueblo.

Gonzalo Martinez Jr.,I knew your father for a lot of years. He was a Union Brother and I was proud to call him my friend.

This opened on April 11th, 1930. Grand opening ad in the photo section.

On August 9th, 2001 a benefit performance was held at the Century 20 – Park Place for the Fox. Ad in the photo section.