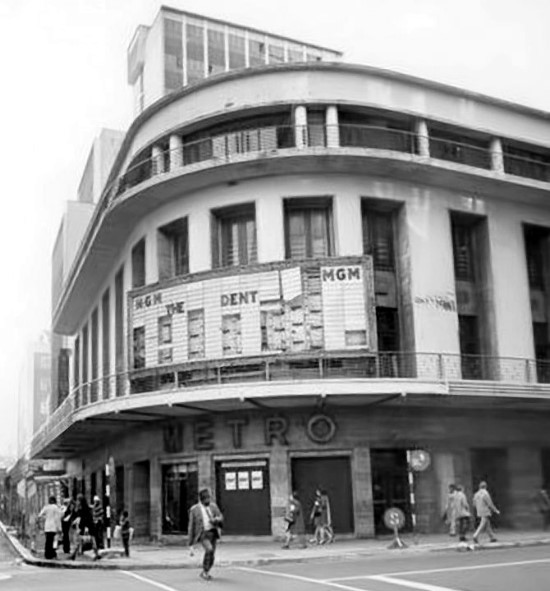 Located in the city centre on St Georges Street (today St Georges Mall Street) and the corner of Waterkank Street. The Plaza Cinema was built in 1932. It was later re-named Metro Theatre.

It was demolished in the late-1970’s and the NBS Building was built on the site.

This web page says that the Plaza Kinema was designed by Kallenbach, Kennedy & Furner, with Walgate & Ellsworth. This was the same team that designed the Capitol and Adelphi Theatres in Cape Town.

Because these blocks of St. George’s Mall and Waterkant Street were inaccessible to Google’s camera car there is no good street view of the site of the Metro Theatre. If you look southwest along the Mall from Riebeek Street, the African Bank on the right is at 6 St. George’s Mall, so the Metro’s site was under the footprint of the gray concrete building just beyond it, which extends to the corner of Waterkant Street. The Colosseum Theatre was across the mall from the African Bank building, so this block had two of Cape Town’s movie palaces.

The only photo I can find showing the Metro is this general view of St. George’s Street, probably taken around 1950m lookingsouthwest from a block northeast of Riebeek Street. The Metro is on the right in the second block. On the left side of the street the first four letters on the Colosseum’s vertical sign can be seen.

The photograph reflected concerning this entry, is definitely not that of Cape Town’s Plaza Theatre built in the early 1930’s, and which was renamed Metro in the mid 1950’s. What has happened to the original factual comments concerning this theatre?

OTCF is correct. Compare the theater facade in the general view of St. George’s Street I linked to in my previous comment. It’s a different building than the one in the photo Mike_Blakemore uploaded last June. Also the marquee of the Metro in Mike’s photo advertises a 1937 movie, and at that time this house was still called the Plaza.

Hmm Well I have just deleted the picture the picture … There is a mystery now.. and I cannot be asked.. to solve it.

Mike, I think your photo depicted the Metro Theatre in Durban, a handsome Art Deco house from Thomas Lamb’s office.