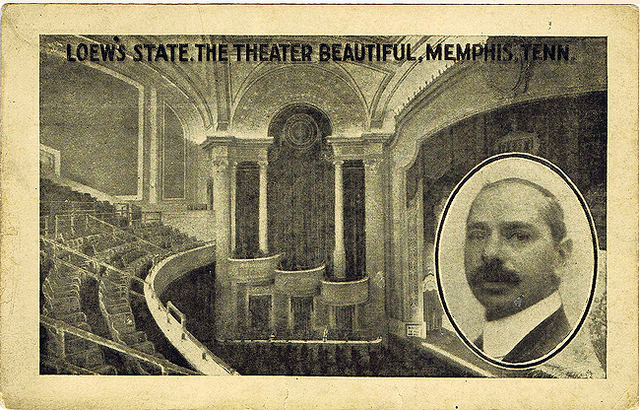 An article from the Memphis Commercial Appeal (Sunday, October 4, 1920) states that the Loew’s State Theatre opens on Thursday, October 7, 1920. Due to lack of available Main Street frontages, a slice was taken out of a row of multi-story storefronts at 152 S. Main Street and a lobby (said in the article to be 150 feet long) was built, which led to a white marble staircase. That staircase bridged over an alley (which was needed for deliveries to surrounding businesses) to a former warehouse structure facing 2nd Street. The main entry was into a mezzanine foyer with lounges and an open well over the orchestra floor below. For its entire existence, the balcony was open and the orchestra seating area was closed when crowds were small. The Loew’s State Theatre seated 2,566 patrons.

The architect was noted theatre architect Thomas Lamb, and, as in many Loew’s theatres of this period, the décor of the public areas was in an Adam style, and survived intact until the theatre closed. The long lobby was particularly elaborate with columns, a second box office, and arched mirrors to make the room seem larger. The staircase had three fine crystal chandeliers. There were numerous flat stained glass light fixtures throughout the theatre as well as plaster chandeliers with stained glass bottoms. The center fixture in the dome was three tiers of plaster with lights studded around the edge (seen also in the Memphis Loew’s Palace Theatre and a number of other Loew’s houses) The exit signs were stained glass, and numbered. Both Loew’s theatres were under construction at the same time, which resulted in Loew’s pictures playing at the Lyceum Theatre and the Princess Theatre.

The Adam style décor was lavished on the entry areas, but the auditorium was more simply ornamented. It had been fitted into a much older existing building, but had traditional stepped boxes and arched grilles over these (another feature used in a number of theatres by Lamb). A Moller organ Opus 2873 3 manual 17 ranks was installed in 1920 at a cost of $6,450.00. This was replaced by a Wurlitzer organ Opus 1271 Style 235 3 manual 11 ranks on December 2, 1926. (The Loew’s Palace Theatre which opened 2 blocks away in 1921 also initially had a Moller organ which was replaced by a Wurlitzer 3 manual 11 ranks instrument).

Loew’s State Theatre was remodeled for talking pictures and later on replaced its tall incandescent vertical sign and curved marquee with a 1930’s modern neon display which used the same milk glass letters. The stage was available for local events. Some notable titles were “Gone With the Wind” and “The Great Ziegfeld”. Big bands played there in the 1940’s. Since Memphis was the crossroads of transportation and had a Naval Air Station in Millington (north of Memphis) thousands of personnel during World War II kept all the theatres full. It remained a major first-run theatre until the 1960’s.

Loew’s State Theatre became notable for being the place where Elvis Presley got his first job in 1948 as an usher, being fired (for an altercation with another usher) in the early-1950’s, and eventually hired back. The manager at that time was Arthur Groom, who managed the theatre for many years. Several of Elvis Presley’s movies later played there, with some private screenings before the national premiere.

The Loew’s State Theatre was owned by the Loew’s Inc. theatre chain until 1964 when it was sold to Gulf States Theatres, who owned it for the last six years of its existence. When it was sold in 1964, the word ‘Loew’s’ on the front of the marquee was covered over so that only the word ‘State’ was showing, obviously somewhat off-center. The name on the vertical sign was also covered over to read ‘State’, though the outline of the ‘Loew’s’ name in neon was sometimes discernible.

It closed in 1970, a victim or urban renewal. Most of its flanking buildings had been built in the 19th Century making the State Theatre seem new by comparison. The last film to play there was “WUSA” staring Paul Newman. Its last manager was Zeva ‘Skee’ Yovan who’s photograph appeared in the newspaper, posing in the flamboyant outer lobby. Over the next two years all but one building in that block was totally obliterated. Peabody Place Avenue cuts through the block approximately where the entrance for the State Theatre was originally located.

The site of the long-vanished movie palace is still a stop on Elvis tours in Memphis today.

Demolition of the State may have started in 1971, but most of it took place in the first part of 1972.

The last movie shown there was definitely WUSA. It was showing when it closed for the last time in October, 1970.

The last movie shown at the Warner was “Coogan’s Bluff.”

Well Elvis worked there and was fired from there I have heard, by old time manager Mr. Grooms I think was his name.

Here’s a link to a remembrance and photo of Loew’s State Memphis: http://www.memphistechhigh.com/memphis/memories/state.html

This message refers to the photo with the curved marquee and the “Bijou” sign to its left.

The film on the Loew’s State marquee is “The Price of Redemption” released in September of 1920. It was a drama set in India, released by Metro Pictures (not Metro Goldwyn Mayer, too old), six reels. Above the film title is “Twenty Movie Stars.” It is possible that this film did not play in Memphis when released; the State opened October 7, 1920, so it could have played in 1921 when the Bijou was open. No Christmas decorations so this wasn’t a Christmas Parade.

A new night photo of the State has been posted.

I’m unsure exactly when Elvis worked as an usher at the Loew’s State. I’ve seen varied dates for the two instances he worked there. However, some sources give the times as Sept. 1950 and June 1951. If those are correct, it’s interesting to note what was showing at the theater while Elvis worked there. 1950: Friday—Sept.1—Last Day—SUMMER STOCK Starts tomorrow—A LIFE OF HER OWN Friday—Sept. 8—Starts tomorrow—LOVE THAT BRUTE Friday, Sept. 15—THE MEN {plus Pete Smith’s Football Thrills) Friday, Sept.22—THE SLEEPING CITY Friday, Sept. 29—SADDLE TRAMP. Starts Thursday: THE TOAST OF NEW ORLEANS There’s two things to note in the above. THE MEN was Marlon’s Brando’s first movie and maybe the sort of thing Elvis imagined himself doing as an actor. THE TOAST OF NEW ORLEANS was a Mario Lanza movie produced by Joe Pasternak and directed by Norman Taurog. If Elvis saw this movie, or at least the trailer and posters for it, he saw his basic movie future as this pictre was not too far afield from the bulk of the Elvis films. In fact, SPINOUT. produced by Pasternak and directed by Taurog, played its first Memphis run at the State in 1966. I don’t have the listings for June, 1951, but I may enter them here at a later time. I would like to know for sure what the actual timeframes of Elvis' two rounds of employment were. As I said, the info above may not be from one of the actual times he worked there, but some sources cite it as one of the two.