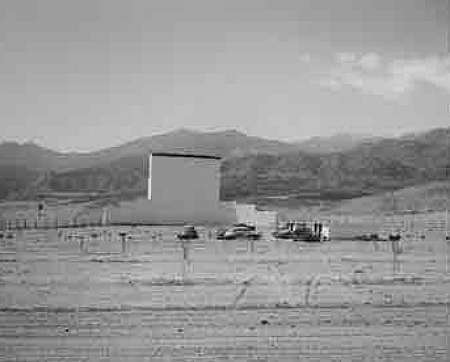 The 8th Street Drive-In was opened on May 5, 1950 with Larry Parks in “Jolson Sings Again” & Gene Autry in “Riders in the Sky”. The 500 car ozoner was operated by Westland Theatres. The 8th Street Drive-In closed on September 28, 1984 with Timothy Bottoms in “The Last Picture Show”. It has since been demolished.

A widely published Associated Press report noted that the final movie at the 8th Street was on Friday, Sept. 28, 1984. It said the drive-in opened in 1950 with the double feature of “Jolson Sings Again” and “Riders in the Sky.”

Westland Theaters sold the 8th Street to developers Bob Osborne and Duane Hays, who held one last performance for drive-in fans. The film that night, and the reason so many papers included the little story, was “The Last Picture Show.”

The opening date was May 5, 1950. As was later reported, the first double feature was “Jolson Sings Again” and “Riders in the Sky,” and it also included the Bugs Bunny cartoon “Long Haired Hare”.

According to a Grand Opening article, the drive-in accommodated 700 cars in its 15 acres “atop the hill at Eighth Street and Brookside Avenue”. It had a grassed-in playground, lighted speaker poles, and attendants to wipe windshields and fix flat tires.

The 8th Street had three 25-foot poles at the back of the viewing area where “moonlight” lamps were operated by dimmers. A Gazette Telegraph story said that they were “the first to be installed west of the Mississippi River and are the latest type developed for drive-in theatres.”

The drive-in was managed by Ralph Langston, who had worked as an assistant manager for the South Drive-In in Englewood CO.