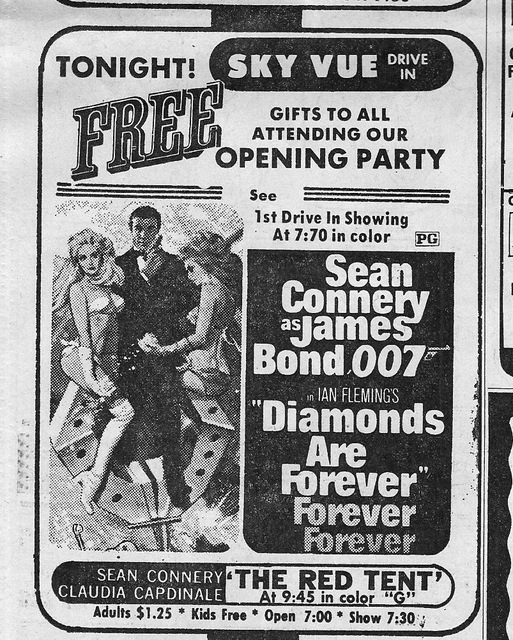 Was this drive-in known by another name before being called the Sky-Vu?

A more accurate address for this theater would be 1680 S 21st St, Colorado Springs, CO 80904. This points to Adventures Out West which is next to the entrance road. Skyview Ln is the entrance road. This did not exist when the drive in was open.

This Westland Theatres drive-in was consistently advertised as the Sky Vue, with an E, though editors sometimes added a hyphen or just combined the words in stories that included the name.

As “Sky Vu”, it debuted in the 1957 edition of the Motion Picture Almanac series of drive-in lists, capacity 450, owner R. N. Cullen. In the 1960 MPA, ownership changed to Westland, and that’s how it stayed through the final MPA list in 1988.

The Sky Vue’s final show was Oct. 4, 1983, showing Octopussy and Rocky III, before closing for the season.

The Colorado Springs Gazette of April 21, 1984 quoted Neal Lloyd, president of Westland Theatres, as saying he had no plans to sell the Sky Vue, but it never opened that year, and apartment construction on the site began in January 1985.

I sure wish I could see a photo of this drive-in’s marquee, because I really don’t know how to spell its name. I wonder whether that sign ever changed.

In 1957, Boxoffice referred to it as the Sky-Vu and the Sky-Vue. The Motion Picture Almanac always called it the Sky Vu.

In editorial copy in the Gazette, an April 9, 1966 story had Sky Vue in the headline but Sky-View in the body. A month later, it was Sky-View in the headline but Sky-Vue in the body. 1967 stories said Sky View, but it was mostly Sky Vue from 1968 on. The Gazette’s final stories in 1984-85 said Sky Vue, so that’s the right (final) name for CT to use. But I still wonder what the sign looked like.

The “Sky-Vue” held its Grand Opening on Thursday, July 28, 1955. Its first program was “The Glass Slipper” with Leslie Caron, “Battleground” with Van Johnson, and “cartoon”.