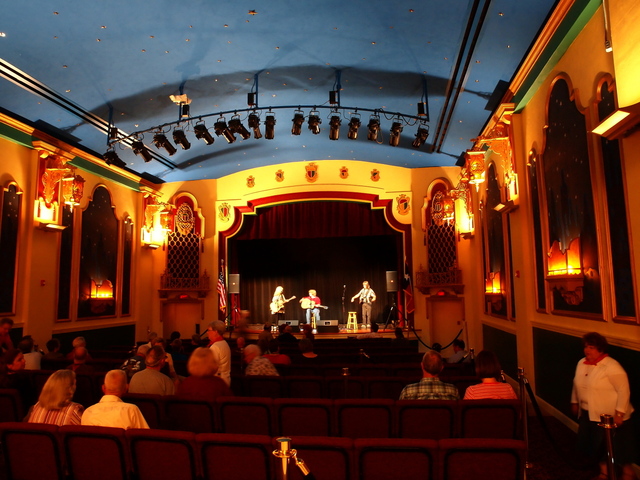 The Texas Theatre in Seguin was opened on March 9, 1931. This stylish brick-and-mortar building is a remarkable combination of styles: part Neo-Vintage, part Art Moderne, part Aztec, and part Western Town style, with a distinctive vintage marquee neon tower which flashed ‘Texas Theatre’ with a big star for Texas. The auditorium was in an Atmospheric style.

The building has never been remodeled and still looks exactly as it did in the 1930’s. The front façade is covered by a roof overhang supported by four square brick pillars and the entry doors and ticket booth are flanked by movie poster display cases.

This theatre was a popular showcase for Western movies from the 1930’s to the 1960’s, and often ran B-Western double features of Gene Autry, Roy Rogers and John Wayne.

Now only open for special events and film programs a few times a year, the theatre is being gradually restored, and is on the town register of historic sites, so there is no danger of its being demolished.

It is a perfect venue for a Western movie film festival, and I can almost picture a horse hitchin' post out front before the street was paved, although I know it isn’t that old, and the street was already paved and lined with cars when it was built.

This theatre may have been part of the same chain that owned the Texas Theaters in both San Antonio and Dallas, Texas, because their marquee towers are identical in style. This theatre is a fine part of the cultural heritage of the grand state of Texas. In 2021 it was renamed Stephen & Mary Birch Texas Theatre.

Slide show of ongoing restoration of the theater:
View link

The theater re-opened for events in March, 2011. On September 22, 2011 they had a “Marquee Partee” open house to celebrate the completion of newly installed neon lighting on the theater canopy and turned on the exterior lights for the first time. Photos of the exterior and interior from the event, as well as earlier (pre-restoration) photos can be seen here:

According to the Seguin Convention & Visitors Bureau, the Texas Theatre opened March 9, 1931, and has the original marquee and “Texas” sign with a star on top. Two movies, “The Great Waldo Pepper,” 1973 (probably the date of filming, as the film was released in 1975), and “Raggedy Man,” 1980, have scenes filmed in the Texas Theatre. Several “shorts” and advertisements have also been filmed at the theater.

In “The Great Waldo Pepper” (1975) the Robert Redford character (Pepper) meets Mary Beth (Susan Sarandon) while watching Rudolph Valentino in “Son Of The Sheik” (1926) in the Texas Theatre. In the final cut we see the INTERIOR only. According to the December 6, 1973 edition of the Seguin Gazette, this scene was filmed on Monday December 3, 1973, while other filming was delayed due to inclement weather.

Some additions and corrections.

The architect of the Texas Theatre was Marvin Eickenroht (1898-1969), He was born in Seguin, graduated the Univ of Texas, went to M.I.T. for postgraduate study in architecture. A newspaper clipping reporting the opening of the Texas proudly referred to “the home town boy” as the architect.

Eickenroht’s papers in a San Antonio library list this theater as one of the many buildings he designed for his home town, including what was then the Seguin High School, the Central Fire Station, the First Presbyterian Church, The Guadalupe County Agricultural Building, and a number of residences.

During the Great Depression, Marvin Eickenroht joined one of the agencies derided as “make work”, heading up the Historical American Buildings Survey, first for Texas, then for a half dozen other Southern States.

His distinguished career also included work for the San Antonio Conservation Society in two major restorations of historic properties, and as President of the West Texas Chapter of the A.I.A.

I’ve seen the Texas Theatre attributed to W. Scott Dunne in secondary sources. Having greatest respect for Scott Dunne, I’d be proud to claim an association between him and the Texas Theatre in Seguin; perhaps he was a collaborator or consulting architect. But I have never seen any ORIGINAL document linking Dunne to this building. If anyone knows where Dunne’s papers are held I’d be glad to pursue this possible connection.

This theater was never part of any chain. It was built by an oil patch lawyer during Seguin’s oil boom in the early 1930s. According to the lore, the father built the Texas for his spoiled son, whose exploits in his airplane (like flying under the highway bridge and crashing his plane on the local race track) were distressing his mother. The hoped-for distractions of Hollywood glamor didn’t do it. It took World War II to change all that.

Enrolling in the Army Air Corps after war broke out in Europe, Alvin Mueller, Jr, became one of the first heroes of World War II in air battles over the Philippines, Java, and Australia. He was awarded the Distinguished Service Cross, the Distinguished Flying Cross, the Purple Heart, and the Silver Star.

By that time the theater had been sold to H.A. “Windy” Daniels, whose heirs sold it to the Seguin Conservation Society.

The Texas Theatre is operating successfully as a venue for musical shows, theatrical events, business meetings, even parties.

There do remain several gifting opportunities to complete and enrich the building, if anyone desires to contribute.

Does anyone have an original source for the claim that W. Scott Dunne was the architect of this theater? Does anyone know a library where Dunne’s papers are kept? I can’t find much of anything about him with a Google search.

Eickenroht’s papers are held in the library of the Daughters of the Republic of Texas:

The summary of the papers at that site includes this paragraph:

“Eickenroht returned to Texas and began practicing architecture in San Antonio in 1925. He worked for several firms, including that of Ralph H. Cameron, before opening his own office in the Maverick Building in 1927. From 1927 to 1934, he completed commissions for schools, theaters, libraries, and churches in Seguin and San Antonio. In 1929, Eickenroht became an elected member of the American Institute of Architects (AIA).”

I hope to see the papers myself one day, but until then, the evidence is that Eickenroht designed the Texas Theatre.

The W. Scott Dunne candidacy seems conjecture — ‘since he designed four or five other theaters named the Texas he must have designed this one too.’ It ain’t necessarily so.

From that site: “This stylish brick-and-mortar building is a remarkable combination of styles: part neo-Vintage, part Art Moderne, part Aztec, and part Western Town style, with a distinctive vintage marquee neon tower which flashed ‘Texas Theatre’ with a big star for Texas.”

From this site, above: “This stylish brick-and-mortar building is a remarkable combination of styles: part Neo-Vintage, part Art Moderne, part Aztec, and part Western Town style, with a distinctive vintage marquee neon tower which flashed ‘Texas Theatre’ with a big star for Texas.”

Nevermind the petty plagiarism, your newly reported site does not advance the cause with a single word of new information. Please try harder.

My challenge is to find a primary source — a document, a news report of the time — anything to prove that Dunne’s name got in the story other by a wrong guess.

Perhaps ‘plagiarism’ was a little rough. It looks like the site you refer us to, arti-fact.com, is not American, probably English as a second language. So they ‘borrowed’ a few sentences from Donald John Long’s original pwrite-up on this site, above. And that site links to this site, fair enough.

It’s hard for me (lacking techie skills) to put a date on the entry on that arti-fact.com site. The Google photo apparently is from 2013. Meanwhile this site has comments dating back to 2005.

Seems clear that http://cinematreasures.org/ has the original material, while arti-fact.com simply ‘copied’ words from here. And contributed not a single word of new information.

So let’s not think that citing other sites which repeat an error somehow proves it is not an error.

My late grandmother Mabel Rutherford used to take tickets there back in the day! I went when i was younger and even though the theater was rundown it was still very glamorous to me! yea to all who brought the Texas back! Cassandra Rutherford

Now seems to be called the “Stephan and Mary Birch Texas Theatre” (even on Google cards when I looked the address up) now, having a patron to keep this theatre operating for years to come. (new images added)