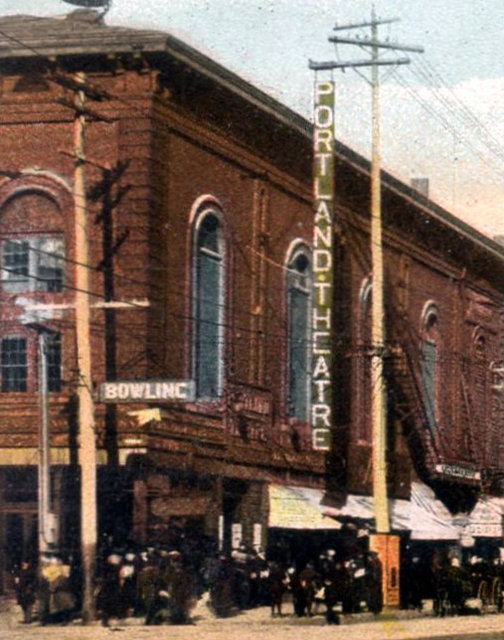 The Portland Theatre was opened on February 10, 1910 with “The Fall of Troy” and vaudeville. Its owners and managers over the decades included Moxley Blumenberg (later the manager of the Portland branch of Paramount Pictures), then James W. Greely (also a part-owner, who had come from Greely’s Theatre in Portland), Hiram Abrams, William E. Green, again James W. Greely, H.W. Hutchinson, Charles Vose, Julius Cahn and Gus Hill. An opening-week program said it was “The finest popular price vaudeville theatre in Maine, Week of May 16 - a bill of exceptional quality' including song and dance acts and ‘Katherine Scott, demonstrator of Motion Pictures’”.

With a cast stone facade, the auditorium was 75 ft. wide and 80 ft. deep with an orchestra pit. The second-floor house was of steel and brick construction with a broad staircase leading from its entrance lobby to a grand foyer running the full width of the building under the balcony. Maroon-draped windows looked out over Preble Street and across at B.F. Keith’s Theatre. Pale green walls were embellished with gold gunmetal fixtures. The stage was 25 feet deep by 60 feet wide, but it lost 15 feet of the building’s width because of an indentation at stage left. The original screen was 12 by 14 feet. Albert E. Hopkins led the orchestra; John Carter was the stage carpenter. The orchestra floor seated about 500 on the main floor and 450 more in the balcony. By 1929 it was operated by E.M. Loews Theatres.

The Maine Historical Society has drawings of the New Portland Theatre by the architect, George Henri Desmond, of the Boston firm of Desmond & Lord. The drawings are not digitized, but the collection of which they are part is open for research according to Archive Grid.

The Theatre Historical Society archive has the MGM Theatre Report for this theater as the “New Portland Theatre”; it’s Card # 430. Address is Preble St. There is an exterior photo taken May 1941. Condition is Fair. The report says it’s over 15 years old, and was not showing MGM product. There were 500 seats on the main floor and 450 in the balcony. The 1940 population was 73,600.

The images Lou Rugani uploaded to this theater’s photo page do not depict the Portland Theatre which opened at 11-13 Preble Street in 1910, but its predecessor, a house at 477 Congress Street, at the corner of Preble, facing Monument Square. The earlier theater was built in 1853 and demolished in 1909, and during its last years was a movie house called The Nickel, which began operating in May, 1907. It’s Cinema Data Project page gives the additional aka Family Theatre, but doesn’t say when the house used that name.

1940s photo added via Bonnie Blythe. Portland Theatre marquee on the far right down Preble Street. Matches the structure in Joe Vogel’s link in the above comment from 2015.

The original 5 photos in the Photos section are of the first Portland Theatre (formerly Deering Hall, then the Nickel in 1907) mentioned below, torn down in 1909, and was not the Preble Street address.

The below description accompanied a 1930s photo I added that was of the New Portland Theatre mentioned and pictured above in Joe Vogel’s 2015 comment. There are at least 4 photos of the New Portland Theatre. As addressed below, it was razed in 1989, and was not still standing in 2014 as the Overview claims. Additionally the modern photo added by Gerald A. DeLuca on 12/22/17 is neither of these theatres and should be removed.

“The previous Portland Theatre (formerly Deering Hall, then the Nickel in 1907) had been on the corner with Congress in the Deering Block, torn down in 1909 for the Fidelity Building. The new theatre opened on February 10, 1910 with “The Fall of Troy” and vaudeville. Designed by G Henri Desmond, who also designed the Fidelity, the auditorium was 75 ft. wide and 80 ft. deep with an orchestra pit, and a cast stone facade. The stage was 25 feet deep by 60 feet wide. The orchestra floor seated about 500 on the main floor and 450 more in the balcony. By 1929 it was operated by E.M. Loews Theatres. Closed in 1963 and then used by the Portland Players, razed in 1989.”