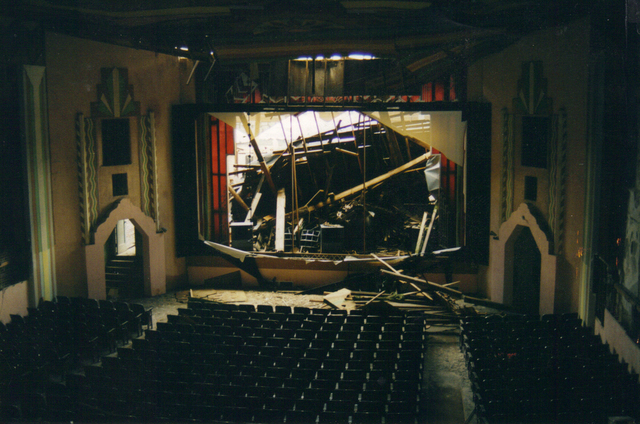 This theater opened in 1879, as the J.E. Bonebrake Opera House, decades before the motion picture existed. It screened its first movie in 1905. But in 1930, new owners purchased the theater and converted the 600-seat auditorium to exclusive motion picture use.

The theater is also known as the location of the first news conference given by then presidential candidate Dwight Eisenhower (who grew up in Abilene). During its life, the Plaza Theater also hosted several movie premieres. In 1977 it was placed on the List of Historic Theater Buildings.

In 1995, the Strowig family, one of the few independent theater operators in the Kansas area, completed an extensive renovation of the theater, which included restoring the theater’s lobby to its 1930’s appearance.

But on May 30, 1999, the gods of preservation played a cruel trick on the Plaza… the roof and a portion of the theater’s wall suffered a partial collapse after a series of violent thunderstorms. The damage was so severe that the theater could not be restored and was eventually demolished. The marquee was taken down and installed on the Fine Arts Theatre, Shawnee, TX.

An extensive remodeling of this theatre to an Art Deco style was noted in the February 8, 1936 issue of Box Office magazine. Architect for the re-design was Larry P. Larsen.

As the Bonebrake O.H. this theater is listed under Abilene in the 1897-98 edition of the Julius Cahn Official Theatrical Guide. The Manager was C.H. Patterson; the seating capacity was 600, and the theater was apparently on the second floor. Admissions prices vary. There were 5 in the house orchestra. There were 2 daily newspapers, the Relector and the Chronicle, and 2 weeklies. Hotels for show folk were the Pacific, Central, Continental and the McCollum. Railroads were the Santa Fe and the UP. Abilene’s 1897 population was 4,000.

Before and after photos of the Plaza’s facade on this page of Boxoffice, February 8, 1936, show the extent of the remodeling that had recently been carried out. The after photo shows the Art Deco marquee which was later replaced, as well as decorative detail that was later lost. 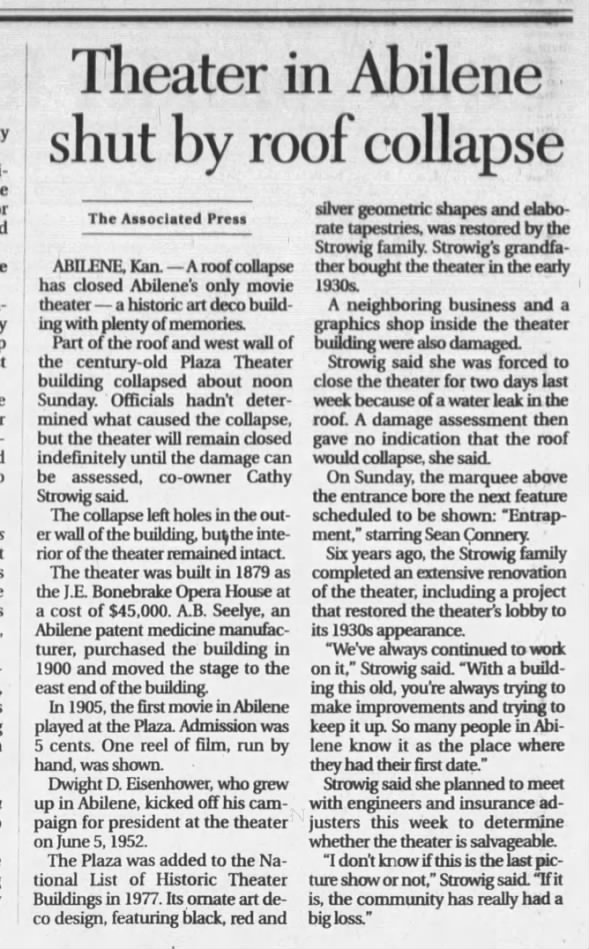