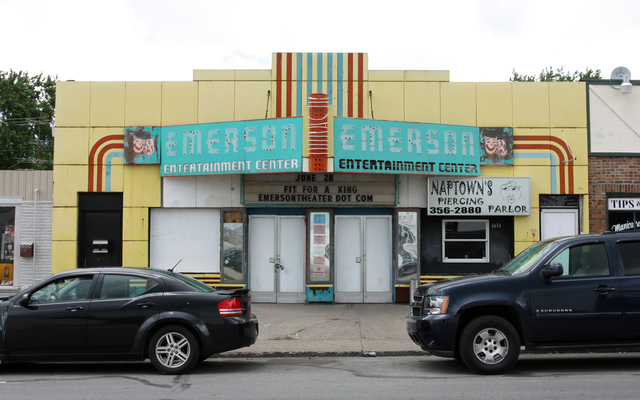 Inside, it has retained much of its lobby and concession area, but the auditorium has had all of its old seating torn out.

The Emerson Theater is today one of the city’s premier small venues for rock concerts, with room for over 400 in the auditorium, featuring both touring bands as well as local talent on Friday and Saturday nights.

Remember the old Kiddie Matinees on Saturdays. One showing was at 10:30 and the other at 1:00. All theatergoers were presented with either a free Slow Poke or Dreamsicle when leaving. The old popcorn maker from this theatre currently resides at the Key Cinemas on the southside of Indy.

Oh, shoot. I did go to the Rivoli, but my Beatles story I posted for that was actually about the Emerson! Glad to see it is still there! Fun facade and general architecture.

From BOXOFFICE,May 1986. the EMERSON THEATRE has reopened.The 439 seat theatre will run second run movies for $1.50 and some art films may be shown.Th etheatre was built in 1931.

The correct address of the Emerson Theatre is 4630 East 10th Street.

The 1986 Boxoffice article Mike Rogers cited above was mistaken about the Emerson having been built in 1931. According to The Encyclopedia of Indianapolis, and as Chuck said in the second comment on this page, the house opened as the Eastland Theatre in 1928, and was renamed the Emerson in 1931.