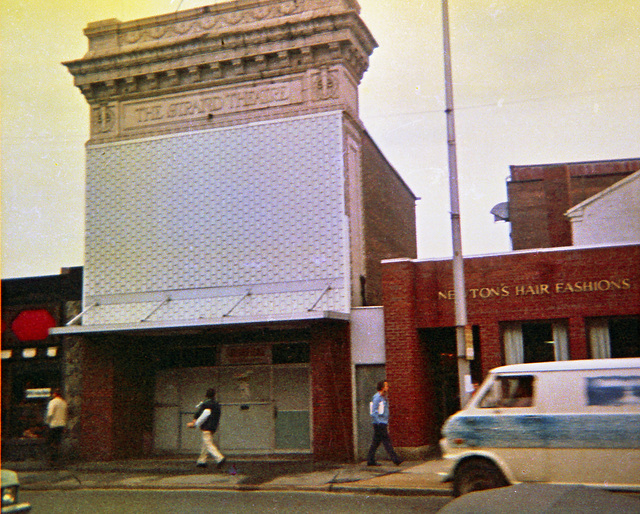 The Strand Theatre was opened in 1917. A beautiful downtown theatre which closed around 1971. It was demolished by the city and the land was left undeveloped.

Ron sent me the photo and I’ve posted it in its own gallery that I will add to as I can. While looking into other thearers today I checked the Lowell business directorys and found the Strand listed at 129 Central St. from 1918 to 1972. It was in the “Strand building” listed at 119 and it appears the at the whole block commening at 111 was built on top of the Pawtucket Canal. I took some shots of the site today which essentially is just a bridge on certral St going over the canal. The last address before the canal is 103 and the first after is 135.
see http://www.pbase.com/jroy/strandlowell

Hold on, I got that wrong. Should’ve checked my notes before I posted. It was at 128 Central, the other side of the Street. Will have to go back tomorrow for the correct shots.

Hey J.V.! Nice pictures! Was checking out your Crown Theater pics and didn’t recognize where the theater was until I remembered the building to the right – It used to be a video arcade back in the late 70’s, early 80’s.

Hi Dave. The picture you posted is the same building as the one that Ron had in the picture from 1950. Obviuosly the marquee is changed and the facede is covered up. The building just to the right is at 130 Central Street, and is visible in Ron’s photo. Jst to the rifgt of that is now the Lowell Academy of Hair school.
Is there anyway to correct the address listed as Warren St to the proper one on Central St?

The July 14, 1969, issue of Boxoffice ran a single-line item saying that the Strand in Lowell had been remodeled.

Boxoffice of March 3, 1975, reported that the Strand Theatre had been sold to a Cambridge developer named Raymond A. Carye. The developer’s plans were not firm, but rehabilitation of the Strand as a cinema-restaurant-cultural center was mentioned, as well as conversion of the building into offices.

Let me reflect on the postings since my last comment back in December, 2009…
I remember the Strand first-hand quite well. To the left of the Strand’s entrance on Central Street was its office building which did straddle the canal. Originally 2 stories, it was ripped down to one story which was occupied by a higher end men’s shop: Martin’s. To the right of the strand were two buildings (a hair academy in the smaller building, and Talbot’s Clothing Store next to that and occupying the Central/ Warren Street corner). In a sense, the Strand had to be wrapped around those two buildings.
The Strand’s Central Street entrance was a log corridor stretching from Central Street to the theater itself. The theater’s lobby, a small affair perpendicular to the entry corridor, was tucked under the balcony and exited to Warren Street. At the Warrent Street exit, there was a small parking lot belonging to the theater which we frequently used.
With regards to the fate of the Strand…after it closed it lay vacant and vandalized (e. g. vandals had managed to tie a rope to the ceiling where the great chandalier had once hung and used it to swing back-and-forth Tarzan-style). Its only hope lay in its being adapted as a ballroom for the then abuilding Lowell Hilton, but that proved unfeasable economically, and the Strand was knocked down.

My friends and I used to go to the Lowell Strand as part of a monthly slumber party when I was in Jr High. Dad would drive us all up and drop us off; he’d pick us girls up after the movie and my friends would all stay overnight at my house in Bedford. Tickets at the Strand were a dollar and we always sat in the balcony where we had to drape our legs over the row of seats in front of us to have enough leg room. I remember seeing “Gone With the Wind” (a revival showing, not a new release) there as well as “House of Dark Shadows” and “Night of Dark Shadows” (hardly top rank movies but very appropriate to the Strand’s ambiance). I remember the place as having sort of decaying elegance. It was way more fun to go there than to one of the newer, more expensive theaters.

The Strand in Lowell is listed in the 1927 Film Daily Yearbook as having 1,763 seats and open daily.

The March 11, 1940 obituary of Lowell architect Harry Prescott Graves in The Lowell Sun mentioned both the Strand and the Merrimack Square theatres as being among his works. It’s possible that Graves acted only as supervising architect for Funk & Wilcox, or he might have been a collaborator on the design. So far I’ve found no other references about Graves' involvement in the project.