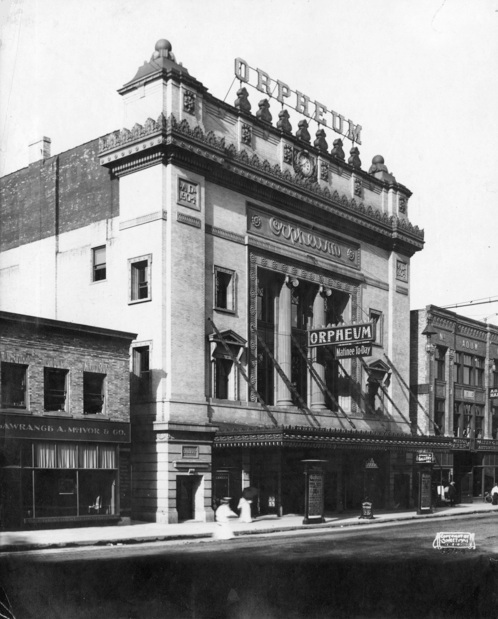 Seating around 1,490, the Orpheum Theatre’s impressive facade of limestone and terra cotta featured the circuit’s name boldly inscribed above the two-story colonnade above the main entrance, which was covered by a simple glass-and-iron canopy marquee. In the early years, the only signage on the first Orpheum Theatre was the theater’s name in large letters on the rooftop, illuminated by lightbulbs at night.

Among the many big-name performers in the Orpheum Theatre’s vaudeville days was Houdini, in his first Minneapolis appearance, in 1915.

When the Orpheum circuit built the much larger and more ornate Hennepin Theatre in 1921, they made that theatre their new Minneapolis home a year later, renaming it the Orpheum Theatre. The first Orpheum Theatre reopened August 27, 1922 as the 7th Street Theatre, and switched over to movies.

The 7th Street Theatre closed in 1940, and was torn down soon after, a sad ending for a still-beautiful and usable theater.

The first Orpheum was designed by the architectural firm of Kees & Caldwell. The same firm later designed the Loring Theatre and the Stimson Building, the two-floor commercial block associated with B. Marcus Priteca’s Pantages Theatre in Minneapolis.

Oy. I meant Kees and Colburn, of course. Where did Caldwell come from? I need to get more sleep.