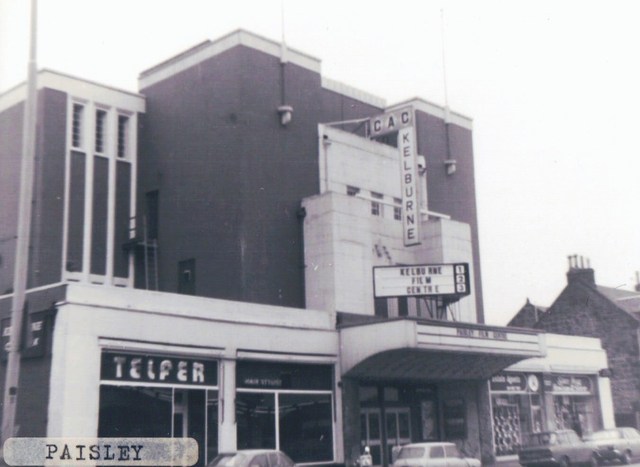 Located in Paisley, Renfrewshire. The Kelburne Cinema was opened on 27th November 1933 with Constance Bennett in “Heads We Go”. Designed by Inverness based architectural firm W.J. Taylor & Co., it was part of the A.B. King circuit. Seating was provided for 1,784 in stalls and circle levels. The proscenium was 35 feet wide and the stage 15 feet deep. There were four dressing rooms. The Kelburne Cinema also had a tea room café for the convenience of its patrons. By 1944 it had been taken over by Caledonian Associated Cinemas.

It was closed in June 1976 as a single screen cinema and reopened as a triple screen in November 1976 with screen 1 in the former circle having 749 seats and equipped with 70mm projection. Screens 2 and 3 in the former stalls each seated 247. A fourth screen was created in the former tea room café area which had 58 seats and video projection, but this had a short life operating for only two years. The Kelburne Cinema was closed on 29th May 1997. The building was badly damaged by a fire in 1998, and was soon demolished. Housing has been built on the site.