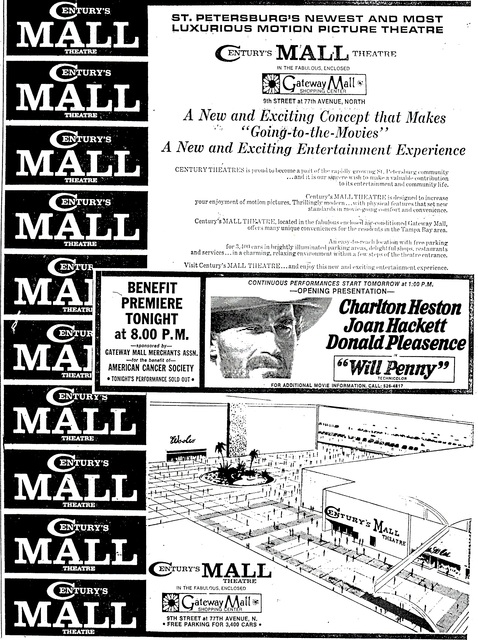 Upon opening in 1968 the Gateway Mall Shopping Center was advertised as an enclosed shopping mall. In later years the mall is listed as an open air shopping center. The original mall may have either been demolished or possibly renovated as an outdoor shopping strip. Google maps the location to what appears to be a strip shopping center along with several stand alone stores and buildings.

Hopefully someone familiar with this area can verify if the original Gateway Mall Shopping Center was in fact torn down and rebuilt as an open air shopping strip. It would also be interesting to know if the theatre building was demolished or renovated for other use.

The seating for Century’s Mall Theatre was listed as 1,100. The opening day advertisements proclaimed, “St. Petersburg’s newest and most luxurious motion picture theatre, a new and exciting concept that makes going to the movies a new and exciting entertainment experience, thrillingly modern with physical features that sets new standards in movie-going comfort and convenience", although there was no mention of the theatre’s amenities.

An exhaustive search turned up no additional information such as architecture, design, decoration, screen size, projection format(s), and sound system. However, based on the year of construction and seating capacity the theatre was more than likely equipped for 70mm projection.

“Will Penny” with Charlton Heston was the opening attraction. The sold out premiere was a benefit showing sponsored by the Gateway Mall Merchants Association for the American Cancer Society. In the coming months the exclusive west coast road show engagements of “Funny Girl” and “Oliver” played here with a long six month run for “Funny Girl".

Century’s Mall Theatre continued operating as a single screen theatre into 1973. During this time the weekly program consisted of occasional double features. In May 1973 General Cinema acquired ownership and the theatre’s name was changed to Gateway Cinema.

Under General Cinema’s ownership Gateway Cinema continued to operate as a single screen theatre for three additional years before finally closing for twinning on May 2nd 1976. The new Gateway Cinema I & II reopened on May 28th 1976 with Walt Disney’s “Follow Me Boys!” and “Mother, Jugs & Speed” on the new twin screens.

An estimate for the twins capacity was probably in the range of about 500 seats for each twin considering the single screen seated 1,100. If so this would make for two fairly large twins.

The regional marketing director for General Cinema issued a statement citing “theatre no longer economically viable” and “industry moving from twins to multitheatre operations” as reasons for the closure.

I use to go to this theater as a child. I remember seeing Star Wars there. I even remember the General Cinenas opening promo reel for some reason. I remeber the ashtrays in in armrests that always had gum wrappers crammed in them. Towards the end of its life it showed $1 movies.

The Mall was very old fashion and toward the end was catering to an older crowd. It had a spa, Woolworths, J Byrons, Radio Shack, post office, dinner theater, drug store and an Orange Julius. One end was anchored by a Zayers. It was completely demolished and replaced with a Target, Office Depot, TJ Maxx and other large outdoor retailers. Nothing is left of the small mall.

I was a relief projectionist at the Gateway after it was purchased by General Cinema. The projection booth was equipped with Century projection and sound heads and Strong “Futura” arc lamps. When it was made into a twin, the Century equipment was retained and duplicated for the second screen and now had Christie AutoWind 2 platters. The theatre never had the capability to run 70mm. The entire closed mall was demolished and is now an open air mall. Mr. E. J. Hanchett was the last projectionist/manager. As previously noted, the mall contained a health spa and it was located next to the theatre. There were times that the chlorine smell was overpowering in the projection booth. I have photos of the booth, lobby and entrance of the theatre.

An better scan of the grand opening ad:

Went to a lot of movies in the 80’s at this theatre. Mad Max Thunderdome for one. Yes, the theatre was on the north side, on an L at the end. The middle of the mall was as described in the first comment. It also had a fitness center – I used to work out there. Goldome bank was near the NW end. Lots of little shops. The elderly in un-air conditioned apts. would ride the buses from one mall to another and Gateway was one of their favorites. There was a jeweler’s kiosk and several smaller shops. Does anybody know when they tore it down? It must have been after ‘96. That’s when I left for the NW.