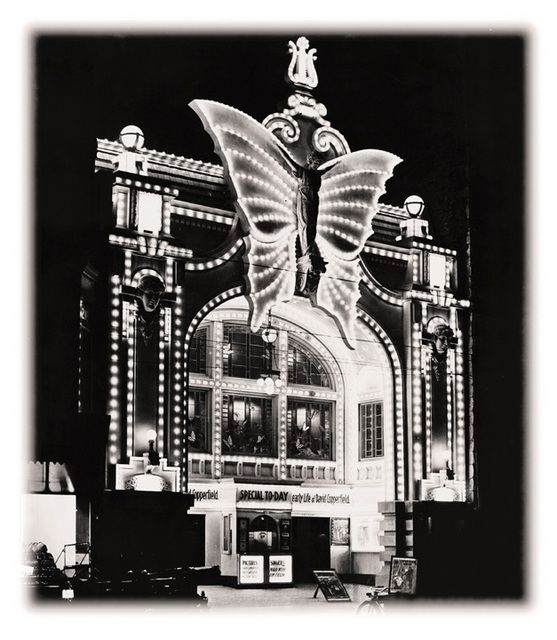 Of the 160 some structures used to show movies in Milwaukee prior to 1950, one among them became known nationally and was truly unique: THE BUTTERFLY. No doubt the name of this show house was chosen because of the design of a terra cotta butterfly for the façade, delineated in 1,000 light bulbs and spanning some 27 feet from wingtip to wingtip, which may have been seen in the Decorators Supply Co.’s catalog. This dramatic creation would certainly have taken Milwaukee and most the rest of the nation by surprise, for it so identified the theatre with that 60-foot-high façade that no name sign was ever required. The butterfly with wings outstretched, had a body of a woman depicted draped in a Grecian gown, and atop the butterfly at the apex of the façade were volutes that supported a pedestal surmounted by a lyre, all delineated in light bulbs to bring the total upon the whole ornate façade to 3,000.

Why such extravagance in a 1200-seat movie house opening on Sept. 2, 1911? Because it was the bellwether of the end of the era of the Nickelodeon theatres, and the start of the era of the ‘Photoplay Parlors’ then coming on the scene. If, as Shakespeare said, “The play’s the thing!” then theatres across the United States proclaimed ‘The facade’s the thing!’ on all their fronts as the twentieth century entered its second decade. We all put on a ‘good face’ to impress someone and exhibitors of photoplays (as multi-reel movies were known early on) were shrewd to realize this need for ostentation to attract attention away from their competitors and also entice the passer-by to enter their ‘dreamlands’ of escapism.

It would be nice to be able to thank local architect August C. Willmanns for this unique artistry, but it would have been extremely unlikely for him and his clients to have the funds to make the hundreds of moulds for the terra cotta pieces that went to make up the façade. Companies such as Decorators Supply (still in business in Chicago) sprang up across the US and offered ready-made facades and interiors of plaster, composition, and terra cotta for those who could afford such elaborate luxury. Other firms specialized in pressed tin (metal) panels and borders to cover the interior of any wood frame building (as by the Milwaukee Corrugating Co., which sold “Invisible Joint Metal Ceilings” (and walls) to theatres nationwide). No doubt it was from just such a source that the architect selected the distinctive façade, and apparently no other theatre in the nation opted for this graceful design. This meant that he merely had to place an order for the thousands of castings needed from the stock at hand. Since there were several prominent terra cotta manufacturers in the Chicago area, and labor to make and glaze and fire such castings was then cheaper than the materials, it was a bargain for the architect, yet no doubt accounted for most of the reported $200,000 cost of the building.

The Butterfly Theatre was erected on the same site as owner Otto Meister’s (see his WHITEHOUSE THEATER elsewhere here) Nickelodeon Theatre and Phanta-Phone dime museum of 1898 at 212-214 W. Wisconsin Avenue, then called Grand Avenue. He and veteran Milwaukee movies distributor John Freuler bought the land and formed the Central Amusements Co. to construct and lease the theatre.

The Butterfly Theatre opened to great acclaim what with its dazzling façade, a lobby with a marble floor and gilded bird cages of canaries to greet the throngs, and an ivory and gilt auditorium draped in crimson and burgundy and lit with crystal chandeliers. The seating was on two levels with 292 seated in the balcony with a mirrored staircase from the lobby. The theatre boasted a 10-piece house orchestra, a $10,000 pipe organ of unknown make, and six classically trained opera singers. This venue was to be ‘class’ all the way.

They didn’t stop at the decorations and music, for the place also proclaimed that it had the most advanced ventilation system capable of changing the air every three minutes (nickelodeons were often known for their pungent atmospheres as a result of no ventilation) and that the whole building was fireproof - this at a time when the public’s memory of gas lit theatres bursting into flame was all too fresh.

While it is true that Milwaukee’s PABST and ALHAMBRA legitimate theatres were well known nationally, the Butterfly Theatre was among the first Photoplay Parlors to make photo postcards available, and images of that dazzling façade at night were spread across the country. So widespread were these cards that two national books (besides “Milwaukee Movie Palaces” by Larry Widen), feature large photo reproductions of that very postal card: “Nickelodeon Theatres And Their Music” from East Coast author Q. David Bowers, and “Tickets To Paradise: American Movie Theatres And How We Had Fun” from West Coast author John Margolies. The Butterfly Theatre rightly was featured as a prime example of the glamour and ballyhoo so common to that era.

That was a short era for the Butterfly Theatre because in only 20 years another acme in the design of theatres occurred on that same spot in May, 1931 when the WARNER movie palace opened. The Central Amusement Co. made a small fortune selling that land to the Warner Bros. theatres and that firm also then bought and demolished two other buildings to make room for their 2,431-seat masterpiece, which was last called the GRAND. In 1930 the butterfly came down, but at least it was not due to failing attendance, as is so common to what old theatres remain today, but only because a larger, even more ornate theatre was to take its place.

Today, that former WARNER/CENTRE/GRAND has been restored after being taken over by the Milwaukee Symphony Orchestra and restored, reopening in fall of 2021 as the Bradley Symphony Center (it has its own page on Cinema Treasures), so the century of entertainment on that site continues into a new era.

There is a photo of the Butterfly on this page:
http://bigscreen.execpc.com/history/widen.php

From the Milwaukee Sentinel of May 1, 1911, the owner of the theater was A. Reis and the architect was H.G. Lotter.

September 2nd 1911 grand opening ad is at View link
James, you can remove the question mark.

(November 29, 1950)
Albert Fink
RACINE – Albert Fink, 83, one of Wisconsin’s leading violinists, died at his home Tuesday after a heart attack.
Mr. Fink studied in Berlin under the world famous teacher and artist Josef Joachim from 1888 to 1894. He returned to America to become a member of the first violin section of the Chicago Symphony orchestra.
After touring with Walter Damrosch, Fink became head of the violin department in the Wisconsin Conservatory of Music in Milwaukee. He taught at Marquette, Milwaukee-Downer and Milwaukee State Teachers college.
In 1918 he became concert master of the Butterfly Theater orchestra, then outstanding in the Middle West.
Funeral services will be held here Thursday afternoon.