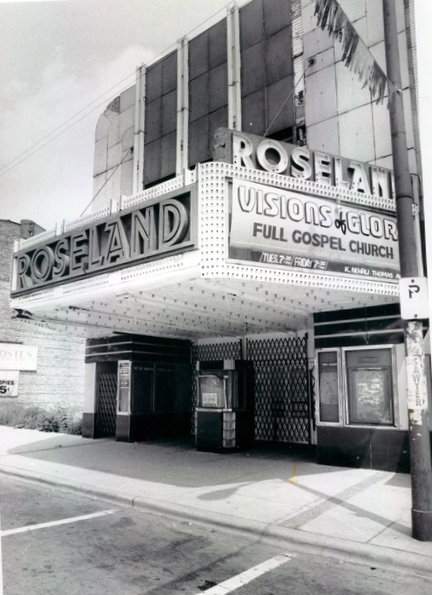 The Roseland Theatre could seat over 960, and was located in a three-story Neo-Classical-style structure, which also housed apartments and offices, as well as retail storefronts.

Sometime in the mid-to-late 1930’s, the Roseland Theatre was remodeled in Art Moderne style, with a new sleek and simplified facade, as well as a neon-lit new marquee. The storefront level of the Roseland Building was also redone in Art Moderne, though the second and third stories' original facade of green-and-cream colored terra-cotta was not altered.

Closed as a movie house in 1977, the Roseland Theatre was converted into retail space, but this had closed by 2018.

John, sorry about the Myasthenia :–( I did a rotation at Rush in 2003 (Children’s Hospital of course). HUGE hospital!! I lost 5 pounds that month just from all the walking, so I know what you mean!

Wow this is wonderful that we have this site out here to remind us of the place where we grew up. :–) You know what we say my love (Natalie) is that we grew up here and we are just fine. I hope your mother is having fun visiting you in CA. Mabye I will take some vacation days to come see you, before you come to Chicago. I love you and miss you dearly.

Natalie and Doug
A friend from Roseland sent me a really great sight. If you are still out there send me your email address and I will foreward it
Mine is

“The past peels away — Return trip to Roseland"
by Curtis Lawrence

I guess it’s an exercise repeated generation after generation. We trek back to our childhood neighborhoods looking for pieces of the past.

My dad, who grew up in Englewood, still does it. Even though in his late 70s, he’s often in awe that many of the houses where he and his three sisters grew up are now gone.

Recently, my trek was to Roseland. I’ve been back within the last several years and have seen the demise of former haunts – the Roseland Theater on 113th Place and Michigan and Gately’s Peoples department store on 112th.

The Roseland, where my brother and I would go to see movies like “Cotton Comes to Harlem” back in the 1970s, is now boarded up.

Looking through one of the open windows recently, I could see the paint peeling off the walls.

The signs are still up for Gately’s, but it’s been long closed and chopped up into smaller stores like Giant Beauty Supply.

So I found myself wearing the same puzzled look my dad often wears when he goes back to Englewood. To try to figure things out, I looked up a former teacher who still lives in Roseland, and a longtime housing activist.

“It was abandoned by a lot of people who should not have abandoned it,” said J. Quinn Brisben, my old history teacher at Harlan High School who has lived near 100th and Cottage Grove for more than 30 years.

“A lot of people thought it was the end of the world,” said Brisben, who is white.

I wouldn’t have expected Brisben to go anywhere. He’s a longtime civil rights activist and was a former member of the Congress of Racial Equality. I even had the privilege of voting for him when he ran for U.S. president on the Socialist Party ticket in 1992.

But many of his white neighbors did pull out, with businesses and jobs hot on their trail.

While the main business strip on Michigan Avenue was hit hardest, Brisben said large parts of Roseland haven’t changed much.

It’s still a working-class neighborhood, with faces changed from white to black. And the housing stock is starting to make a comeback.

“A number of people have gotten their places fixed up and you don’t see the boarded-up windows like you used to.”

Willie Lomax, longtime director of the Chicago Roseland Coalition for Community Control, sees it too.

“In the last five years, Roseland has begun to turn around,” Lomax said. Banks, some encouraged by lawsuits, have done better jobs of investing in the community.

A mini-mall at 115th and Michigan is on the horizon and Lomax said he’s more optimistic than he’s been in a long time.

Lomax, who was a janitor at the old Walgreens on 111th and Michigan in the 1950s, knows the story of Roseland better than just about anybody.

But there are days when even he’s stunned by the transformation.

“Sometimes you look at the vacant lots and the abandoned buildings and you say to yourself, `What happened?‘”

I grew up above Hufnagelâ€™s Bakery at 118th St and Michigan Ave, kitty corner from the Homestore. Reading about ice skating till late at night under playground lights behind Scanlan brought back fond memories.Thank goodness we could warm up in the field house otherwise I might have lost a few toes to frostbite. I still carry the scar where Jimmy Bonifito pushed me across a slick patch of ice and into a bench. Does anyone recall the pool? Or, the elaborate holiday bazaars at the school? We went to the Normal all the time, walking there via alleys which were filled with hollyhocks growing wildly around the garages. I saw MASH there like 4 times during the movieâ€™s first run. A trip up the Dime Store or the Sky Hi would require running swiftly under the viaduct to avoid the junk yard, which was creepy and sinister, perhaps haunted. Every kid knew that. Once my sister got lost in Gatelyâ€™s. She was found behind the menâ€™s counter inside a glass cabinet. One summer, I discovered the cool stuff the local tap, Bob & Gerryâ€™s, would toss out. Terrific bottles, crates and beer signs. Odd bedroom decor for an 8 year old. My greatest joy though (next to ice skating) was a trip to Rayâ€™s and his marvelously stocked penny candy counter. Thank you for posting; wonderful to read other comments.

This postcard shows what it looked like before remodelling

thanks for the post…..I went to Mendel H.S. and have been on that corner often(there’s a GREAT doughnut shop there now).

Here is a November 1955 ad from the Suburbanite Economist:
http://tinyurl.com/bvmwnj

The William Swanson Company was operating a movie house called the Roseland Theatre in this neighborhood at least as early as September, 1908. I haven’t discovered the exact location of this early theater, so I don’t know if it was this same house and it was later expanded (it seated fewer than 600 in 1909), or if the 1914 Roseland was an entirely new theater that replaced the original.