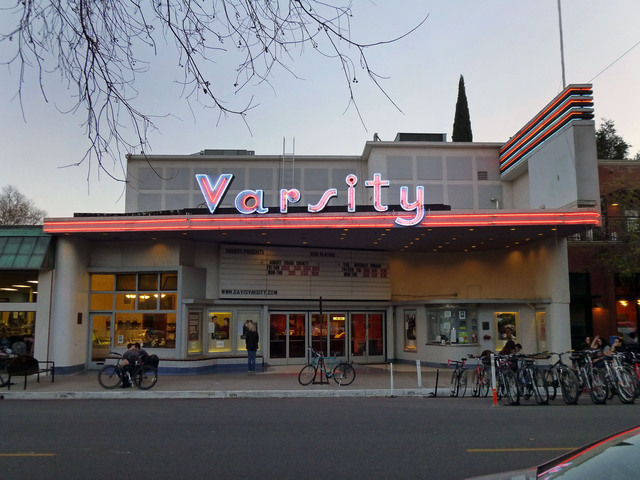 This was the second Varsity Theatre to operate in Davis. It opened June 9, 1950 with “The Eagle and the Hawk”. It was designed by architect William B. David, with Art Deco style murals on the splay walls of the auditorium designed by San Francisco based designer Gale Santocono. It operated as an 850-seat single screen movie house until 1975. From 1975 to 1990 movies shown on twin screens.

In 1992, it was de-twinned and from October 10, 1992 to present, it has been run by the City of Davis as a community theater presenting live entertainment and occasional movies. In 2015 its program consists of 1st run movies and independent movies.

It appears that this should now be the official web site:

This isn’t the most elaborate web design in the world. But it is clear that they spent a little bit of money to make sure the results turned out to be respectable.

There was a story in Boxoffice magazine, June 1946, about the Varsity Theater being sold by the Luft family to Davis Theaters, Inc. The article mentioned that the Varsity had been operating for about 25 years at that time, which would put the opening around 1921. Since the listed Varsity opened in 1950, I’m wondering if there were two Varsitys or alternatively if the 1950 opening was not a new theater but some kind of remodel.

There were indeed two Varsity Theatres in Davis. The August 5, 1950, issue of Boxoffice carries this brief item: “The old Varsity Theatre building will be razed in Davis to make way for a new store.”

Does anyone know who created the original murals? As a kid, I used to stare at them every time I went to a movie (I was always a bit early) and they utterly fascinated me.

Sometime last year they added a 2nd screen, but this time it’s behind the current one in an area that used to be a backstage area when they did live shows. I haven’t been in since this was done so I don’t know what’s changed- the screen they put in the main auditorium upon re-opening was MUCH too small though, and they’ve been pretty lackadaisical presentation-wise. Several movies I’ve seen there were platter-scratched- how dumb do you have to be to do that when you’re only running ONE screen?

I recall double dating with my girlfriend back in 1987 at the Varsity theatre. Remembering that it was a really small theatre with stadium type seats if I recall correctly. A screwball comedy film that we watched called “Ishstar” with Warren Beatty and Dustin Hoffman. The film was not one of their best, it was the first time and last time I ever saw a movie at this theatre.

A few January 2014 photos can be seen here, here and here.

Anyone have a photo of the first theater in Davis?