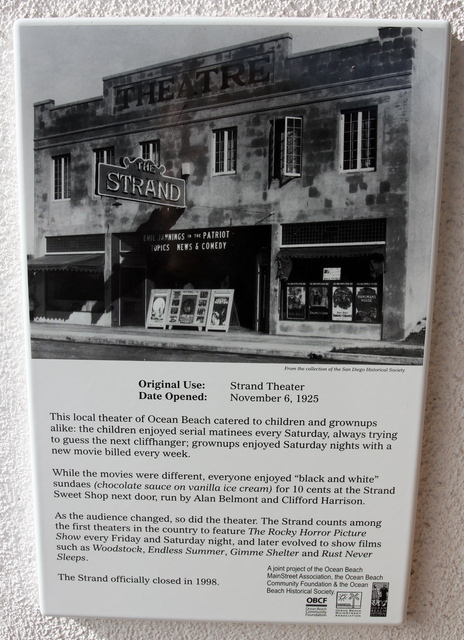 The Strand Theatre was located in the Ocean Beach suburb of San Diego. It opened November 6, 1925, and operated until 1998.

The Strand Theater in OB is now a Wings store (http://www.wingsbeachwear.com). For the community, I think the general idea at the time was to get the place renovated as it had experienced years of neglect and disrepair. Heartbreaking to walk inside and see what it has become though — a classic single screen converted to selling beach-themed schlock merchandise….

Right. I saw it last night and saw “..rand” and the next scene indicated it was San Diego.

A 2004 photo I took of the Strand can be seen here:
View link

I “worked” at the Strand in OB in the later 1970’s pushing popcorn at the midnight shows of “Rocky Horror”. I was usually dressed as the character of Magenta. REAL bikers rode their Harleys up and down the aisles whenever Meatloaf came on the screen as the doomed biker, Eddie. It was the wildest! There was a private, tiny soundproof screening room on the balcony that fit two or three people; that was our hangout. I’ve seen “Rocky Horror” midnight shows in LA and New York City and the one at the Strand was by far the wildest!!

Actually there wasn’t balcony at the Strand. That was an area to the left of the projection booth where someone had literally cut a hole in the wall and put a piece of thick plexiglass in it and placed a couch in front of it. There were a series of rooms upstairs which had been two small apartments with one bathroom (never could figure that one out). I don’t know when they ceased to be apartments, but they became the manager’s office and store rooms. I really don’t know how that little sitting area worked into the shceme of things, but it was never a balcony. The first time I was ever in the Strand in 1974 (to run the special showing of “Woodstock”) that viewing window wasn’t there, so it had to have been done some time between 1974 and 1982 or ‘83 which is when Walnut took the place over and it became on of my responsibilities.

I seem to recall that in the late 70s or early 80s the Strand changed hands and for a while showed old black and white films. The seats were removed and replaced with carpet and pillows so the audience could lounge around on the floor while watching the movie.

The Strand operated into the late 1990s I remember going on a date there as a teenager… there WERE movie theater seats.. never saw carpet and pillows, which would be a dumb idea anyway.

I remember going to the Strand Twice. Once an older friend took me to see “Emanuelle: The Joys of a Woman” as a way of introducing me to the concept of the birds and the bees although, if the truth be told, I really didn’t need the introduction. I pretty much had the idea anyway. Later another friend and I went there to see a double bill of the original 1954 television production of “Casino Royale” starring Barry Nelson, along with the 1967 film starring David Niven, Woody Allen, Orson Welles et al. I never forgot certain bits of Emanuelle, but on the whole I really would have rather seen it by myself.

Goodness, The Strand! Went there many, many, many times in the early 70s, and there began a lifelong love of cinema. Yes, saw On Any Sunday and Rocky Horror. Also many others I haven’t seen exhibited anywhere since: Things like Candy & Putney Swope. Used to be able to smoke there. Many joints of the lowest quality Mexican grass only added to the experience.