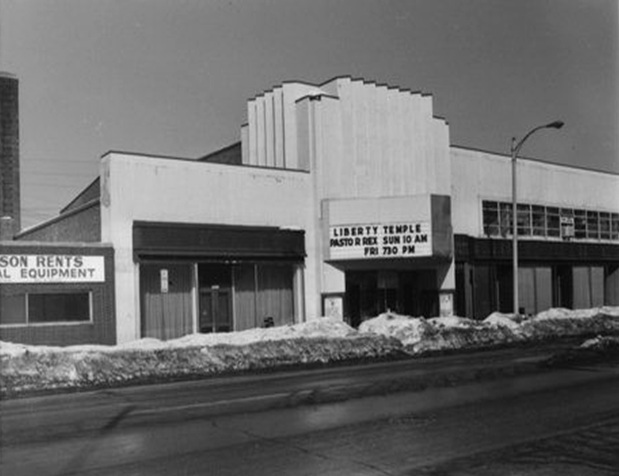 By 1935 when the Sherman Theatre opened, the Great Depression had put an end to movie palaces and building in general, but one Mr. Reed of the Graylock Investment Co. did have funds and sought to build a commercial strip on Burleigh Street on the north side of the city of Milwaukee. Earlier, in 1915, this firm had developed the Downer Theatre, which was designed by Milwaukee architect Martin Tullgren. Evidently he liked the Tullgrens' work because in 1935 he asked Martin’s son, Herbert, to design his new theater and stores/offices building. Herbert Tullgren (1889-1944) is not known to have ever designed another theater, but his work in apartment buildings especially is well noted by experts.

The Sherman Theatre was named after the nearby avenue of that name, and it was named after the famous Civil War General officer of the Union Army, William Tecumseh Sherman (1820-1891), when the street was created in 1909 by a land development company. This cinema without any stagehouse, is to be reckoned as a notable example of Tullgren’s work as a good example of the modernistic influence in design characteristic of the post-1925 change in design in the direction of Art Deco and then Art Moderne. The stated cost of $85,000 for the theater with eight stores and ten second floor offices left little money for ornament, but then ornament was not much in favor by that time. What little there was on the mock, windowless, 2-½ story tower of the facade above the entry was confined to a zigzag fluting featuring strips of red and blue neon tubing between the vertical flutes. The typical triangular aluminum marquee was one of many of Poblocki Sign Co.’s ‘Alumilighted’ versions having access from a hidden door on the wall at the back side of the marquee, a boon to guys changing the marquee who did not have to go out on a ladder in wet or snowy weather since they could change the letters from inside the marquee by merely swinging aside a frame of light bulbs and pulling away a panel of milk glass and reaching out and pulling off a letter from its track and replacing it with a new one. The only trick was being able to read the lettering backwards to make sure it read correctly from the front of the marquee.

Such neon tubing was to be the only real ornamentation in the 995-seat auditorium of this Art Deco style design, one of only three such in the city (the Fox Bay Theatre and the Varsity Theatre being the others). The blueprints indicate a series of six neon tube lozenge shapes upon the ceiling, each about 16 feet in length, running from the center line at back to front, touching point to point. These double tubes of red and blue cross the plaster arcs into which the ceiling panels are divided in gentle curves from sidewall to sidewall, arcing toward the stage. The sole other ornaments indicated were half-round fluted pedestals flanking the rectangular proscenium arch, each topped with a trapezoidal urn-like shape. The plaster walls had plain, painted panels without pattern. Of course, there was no theatre pipe organ since sound movies had debuted seven years earlier, and thus no orchestra pit was needed since musicians no longer accompanied films. There were no dressing rooms since there was no true stage. It was one of the first real cinemas built in the nation, strictly for ‘canned’ entertainment.

Unfortunately, none of this can be confirmed by observation today, since the theater has suffered through a minor fire and years of neglect and some alteration during the years it served as the Liberty Temple church. The seats still remain, along with their modernistic end standards, done in gray matte metal convex flutes separated by arrises of golden fillets, all in gentle arcs, top to bottom, with black plywood backs coped in aluminum and having rose nylon cushions. Perhaps it was the gentle curves of these standards which inspired the arcs in the ceiling. Plain wooden doors lead into the four aisles from which the carpeting has been removed, leaving only painted concrete there today.

The ticket lobby has a decor of Vitriolite in cobalt blue, gray and pale yellow with some trim in white metal scallops on the rear of the island box office’s cornice. The two light fixtures against the ceiling are in the shape of long triangles with fluted glass panels divided and held by triangular silver metal fins and end caps, each holding incandescent lamps in white. Silver metal poster frames adorn the plain plaster walls, but they are empty of any posters these days. From here one enters the lobby which had a silver foil wall covering flocked in crimson and scarlet in a baroque floral motif! Obviously, this scrap, seen inside the wall mount-box holding the Emergency Telephone to the projection room, was not the original wall covering, which is unknown. The pile carpeting was a similar design in a wealth of muted colors, while the far end of the tunnel-like room featured a circular pedestal drinking fountain in a semicircular niche going from the floor to the flat ceiling, which is only about ten feet high, but illuminated by a single rectangular cove framing the rectangular plaster expanse.

Roof leaks have required the removal of all these surface treatments, but it is still hoped by Milwaukee Neighborhood Ventures Corp., the present owner, to return the theater to use by means of subdividing it into smaller auditoria, but the declining neighborhood makes outside investors unlikely. There never was a balcony or stagehouse (merely a six-foot-deep recess which contained the screen and a motorized front traveler curtain before the arson in March of 1977, for which the janitor was charged by the District Attorney) and the projection equipment was removed long ago. The following year it was sold to the church and their enlarged forestage platform still stands. Perhaps it will never again be as it was on Christmas day of 1935 when it opened with a double bill of “She Married Her Boss” and “Diamond Jim” with a Popeye cartoon, but we can hope for a brighter future for Mr. Tullgren’s vision of a cinema in Streamline Moderne form.

Currently, the Marquee is only a frame of metal and it seems the theater is empty. This is sad for me as this was a place where I saw a number of movies which are now classics.

The building was for sale when this undated photo was taken:
http://tinyurl.com/4t5h74

This opened on December 25th, 1935
You can see the grand opening announcement
on this newspaper page in the Fox page at
View link