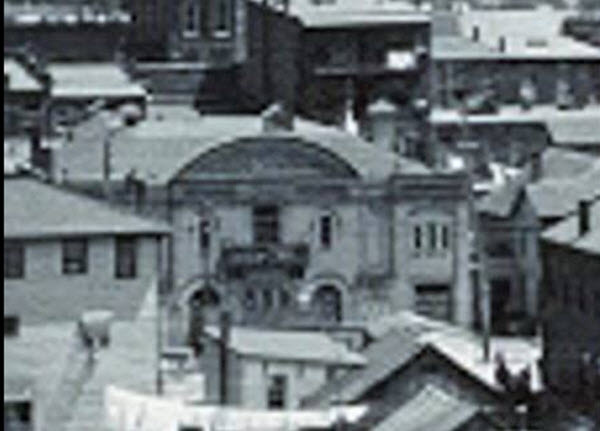 One of Binghamton’s earliest vaudeville houses, in operation by 1892, the first Lyric Theatre started life as the Bijou Theatre. “Back in the roaring ‘90s”, the Press reported in 1929, “the Bijou Theatre was the most popular center in this section of the state for burlesque presentations.”

The theatre, in its various inceptions, would have a long and tumultuous history and as early as September 1904 the theatre manager (J.P.E. Clark) announced the first of what would be quite a few gaps in its existence, stating that the theatre would probably go dark and its future was in question. It is not clear how long the theatre was closed (“a couple of years” according to the Press in 1908) but a reopening “for the season” was announced in December 1906, with lessees The English Amusement Company presenting “England’s Famous Moving Pictures,” as first card, which continued into the following year.

The Bijou Theatre was operating in March 1908, with Dan Darleigh as manager. On September 11, 1908 the Bijou Theatre was reopened after a change of hands and name to the Mozart Family Theatre, which was to form a new vaudeville circuit of 15 theatres, the Mozart Circuit. The Mozart Family Theatre lasted exactly one day, after which presentation they relinquished the lease. In two weeks the story went public and on September 26 the Press puckishly headlined: “Once Bijou, Then Mozart, And Now Lyric Theater”. Apparently a dispute had arisen over a lease by an athletic association that used the Bijou Theatre building to stage boxing matches, and the tenants had won out, which sent the Mozart folk packing, not wanting to get involved with “fisticuffs”.

The management of the newly-dubbed Lyric Theatre reacted swiftly and planned to reopen as a dual-purpose movie theatre and burlesque house, with boxing matches thrown in for good measure. It did reopen shortly thereafter and continued in this manner for many years, gradually moving over entirely to motion picture presentation. With the advent of talkies, the manager elected not to remodel the aging theatre, but instead razed the building and erected a new four-story brick theatre on the same site customized for talkies, which opened to great fanfare on Monday, October 14, 1929. Sadly, the ‘new’ Lyric Theatre had just as checkered a career as the old one, and it became the first of Binghamton’s big movie houses to close with the advent of TV. It was sold to Hamlin’s Drugs in August 1950 and was razed shortly thereafter to make way for a parking lot…which is what remains on the site to this day.

As the Bijou, this theater is listed under Binghamton in the 1897-98 edition of the Julius Cahn Official Theatrical Guide. A. Fennyvessy was Mgr. 800 seats, theater was on first floor. Had both gas and electric illumination. The proscenium opening was 25 feet wide X 17.5 feet high, the stage was 23 feet deep. Another theater in Binghamton was the Stone Opera House. The 1897 population of Binghamton was 45,000.

What’s sad is the new Bijou that replaced this one only was open 15 years. It apparently closed at the very beginning of 1945. While we’ve finally located pictures of the later theatre, it would be really interesting to know what this one looked like.

This theatre, it seems, had nothing but problems.

Amazing to see a picture of this mysterious old place.