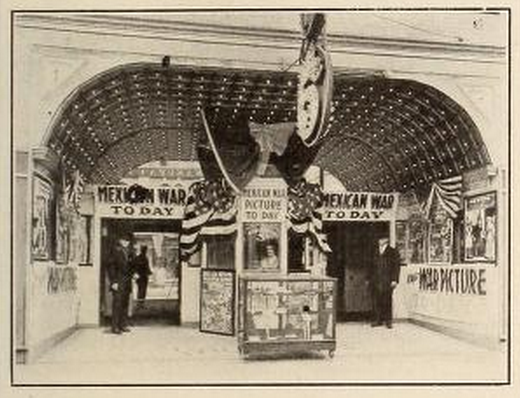 This is the second Vaudette Theater listed on Cinema Treasures in Milwaukee, they both opened in 1908, but are both at different addresses. This Vaudette Theater was located on N. Old World 3rd Street, between W. Grand Street and W. Wells Street. Vaudette seems to have been a popular name for theatres in the early days, especially in Wisconsin and Michigan. I could find no definition for the word, but it is similar to VAUDEville VAUDEtte??

Owned by partners Otto L. Meister, a former vaudeville actor, and A. Reiss. In 1908 they remodeled the Lawrence 5 Cent Restaurant and made the Vaudette Theater.

The first attraction was a ghoulish silent film called “The Glass Coffin”, and to attract customers they put a replica of a transparent coffin with life-sized wax figure just inside the lobby, visible from the downtown sidewalk. Years later Meister recalled. “The theater men were scandalized and the public lifted its eyebrows, people would pass and repass the old Vaudette, look at that figure in the coffin… and they would say, ‘Gracious, I hope nobody sees me go in here’, and pay their nickel and keep on coming. We had as many as 2,800 people a day in the old Vaudette. In those days, the films were turned and rewound by hand and the seats were, in the last row, directly beneath the machine booth. One night I heard a startled cry from one of the audience, and ran back to find that the film – operator had got so interested in the picture, he wasn’t watching it – had leaked through the peep hole and was wound around the customer’s neck.”

They built up an enormous business especially those with Charles Chaplin. Banners showing Charlie Chaplin were displayed everywhere. Motto “A Keystone Comedy for every day of the year.”

Your Hats To Big!

The Vaudette Theater boldly confronts the issue of ladies' hats. It was a rather hazardous thing to do, but Meister made up his mind to enforce his new rules and paid no attention to the numerous protests. One single evening he ejected 23 women who insisted on keeping their hats on in seats not provided for this purpose!

Miester said “The Vaudette Theater has an innovation that I cannot pass. It is a sort of Jim Crow car, not to keep black from white but to keep big hats from obstructing the view of the little man. A number of rear seats are partitioned off by a neat brass railing and are specially reserved for the ladies who do not wish to remove their hats. The 23 women declared they would boycott the Vaudette, but the great attraction of good and well shown pictures decided them to submit to the inevitable and today they have rejoined the ranks of the patrons and obediently remove their hats or take the specially reserved seats. When you can persuade a woman to discard her hat to see motion pictures it is sure proof that the pictures are of the best quality and are shown as they should be”.

The Vaudette Theater was closed in 1923.