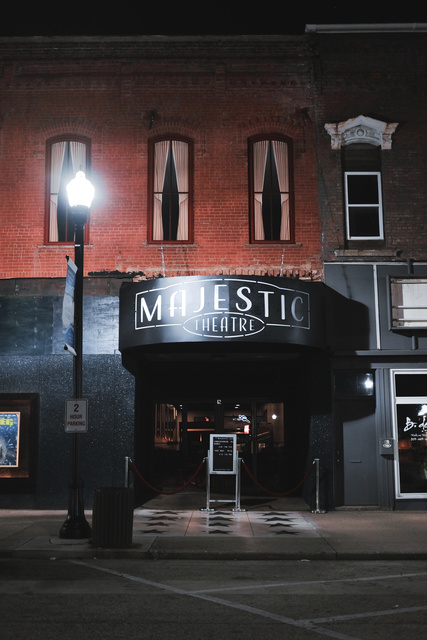 The Garden Theater originally opened December 8, 1915, as a single screen theater, seating around 300 on the main floor and around 65 in the balcony.

In 1980, the Garden Theater became a twin, when an adjacent jewelry store closed and the space was converted into a second auditorium, seating 130.

The Garden Theater was most recently been operated by Vern Reynolds, whose mini-chain also consists of the Palace Theatre in Elmwood and the Town Theatre in Chillicothe. It was closed January 25, 2015.

It was reopened by Eisentraut Theatres as the renamed Majestic Theatre on April 26, 2018 with seating for 300.

The Illinois section of the January 1, 1916, issue of the trade journal Motography had this item about the Garden Theatre:

“The new Garden theater, North Main street, Canton, had its formal opening December 8, which was attended by 1,200 people. The theater is spacious and fire-proof and presents a very beautiful and attractive appearance with its lattice window effects with overhanging flowers, while suspended from each beam a bird cage with songsters sing softly and sweet. Joe Ross is manager.”

Unfortunately, the Garden has just closed, due to lack of 35mm prints:

CANTON — The Garden Theatre, 62 Main St., has closed. Owner Vern Reynolds said attendance suffered since the theater was unable to get new releases in 35 mm, the film format that Hollywood had used for more than 100 years. Reynolds added the Canton movie house to his regional chain in 1999, but the Garden has operated as a theater for more than 60 years in downtown Canton, he said. “I used to have 22 screens, but now I’m down to one,” said Reynolds, referring to the Palace Theatre in Elmwood, where a digital projector was installed last year. “I’ll keep Elmwood going for a couple of more years and then sell the theater,” he said. Reynolds, who turns 68 this year, said he was planning to retire. Theaters that didn’t acquire digital projectors have seen the number of films available in the 35 mm format dwindle to a trickle, said Reynolds. “Some studios continue to make 35 mm copies on some films, but in one case made only three prints for the entire state of Illinois,” he said. Reynolds said nondigital theaters are a dying breed. “There are only a few hundred theaters across the country still operating with 35 mm. I know several hundred have closed,” he said. Reynolds said the Canton theater is for sale and hopes that a new operator can give it “new life.”

Obviously the Garden did not make the conversion to digital prior to closing this year, as implied by this report. It is for sale, and one could likely get a really good deal on it. I saw a film there last year, and the audio was awful. I don’t quite understand how Fulton County and its largest town cannot support a quality moviehouse.

I see that although the Garden is closed it still has a page on the Reynolds Theatres web site. The Palace in Elmwood is still operating. The Town Theatre in Chillicothe is still open, but is no longer operated by Reynolds Theatres. The Optimist Club in Chillicothe bought the Town and reopened it with digital equipment. Perhaps the Optimists or some other service club(s) in Canton could take a leaf from the Chillicothe Optimists and do the same thing with the Garden Theatre.

New photographs have been added of the marquee of the Majestic Theatre which was installed in August 2018.