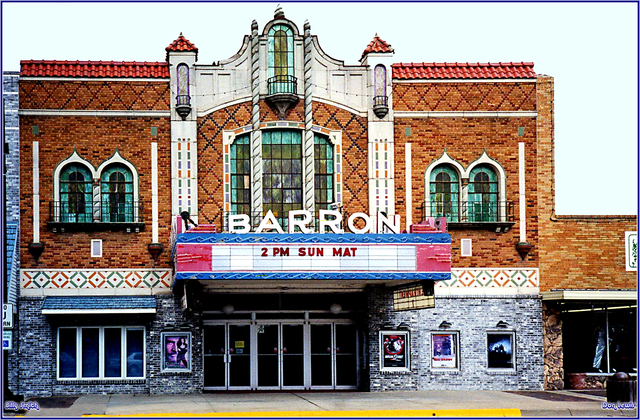 The Barron Theatre was opened in 1930 as a single screen theatre. It was later twinned.

The Barron Theatre closed in December 31, 2013, a victim of the conversion to digital projection. It had reopened by 2018.

Glad to see this venue is alive and well – because the marquee told a different story in this photo taken circa 1991.
View link

Charles Barron began his exhibition career in 1912, operating the Majestic Theatre at Ponca City, Oklahoma. He began operating theaters in Pratt about 1924, and operated the old Kansas Theatre until it burned in 1939, when he rebuilt that house and continued to operate it and the Barron until late 1943. After selling his Pratt theaters to Commonwealth Amusement Co., he moved to California, though he kept a part interest in the Anthony Theatre at Anthony, Kansas. He died in 1952.

Commonwealth was operating the Barron Theatre when it was renovated in the mid 1960s. Alterations included a drop ceiling and Masonite paneling in the lobby. If the original interior of the theater was as ornate as the facade, I hope not too much damage was done in the remodeling. Maybe it can be restored someday.

There was a theater called the Cozy in Pratt in the 1920s. It is listed in an ad for Reproducto Player Pipe Organs that appeared in the September 18, 1926, issue of The Movie Times. Another Reproducto ad in the November 13 issue listed C.H. Barron as the operator of the Cozy, too. I’m not sure if this was an aka for the Kansas Theatre or not, though both were mentioned in the magazine about the same time (the Kansas was mentioned in the November 20, 1926, issue.)

A previous view of the Barron from 1991 (listed above) was deleted – and a new version of the same photo is now in its place:
View link

The Barron used to have an orchestra pit in front of the stage, which was evidently covered over during a renovation in the 1960’s. When I was a kid the coolest thing was the huge chandeliers which changed colors as the lights were lowered before the movie began. Those were removed when the theatre was twinned several years ago. It’s too bad that residents of my home town now have to drive at least 50 miles to see a movie, because nobody could come up with the $$$ to convert the projection system to digital. The town has invested in other things, but nobody has ever wanted to give this wonderful theatre some TLC.

Too bad the Barron has been unable to join the digital age. And now the sidewalk in front of the house is torn up. New photos in the pictures section.

yes. it is too bad about the Barron not converting. it would have been over $500K investment to just get it in operation condition. it is has been sold, and is now going to be used by a Christian Youth Organization.

Appears to show movies again as of 2018 according to its facebook page.