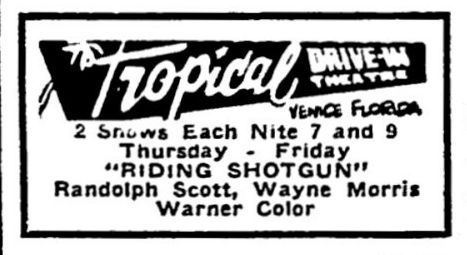 The Tropical Drive-In opened on May 8, 1954, featuring the 1950 western “Dallas” with Gary Cooper, Ruth Roman and Steve Cochran. The second feature was the 1953 drama “Cry of the Hunted” with Vittorio Gassman, Barry Sullivan and Polly Bergen. It was operated by James W. Ponder & ABC Theatrical Enterprises with a parking capacity of 250 cars. It was later operated by Floyd Theatres in the 1970’s. I believe it closed in May of 1978. It was later demolished and cleared for redevelopment. It is now a Publix food store.