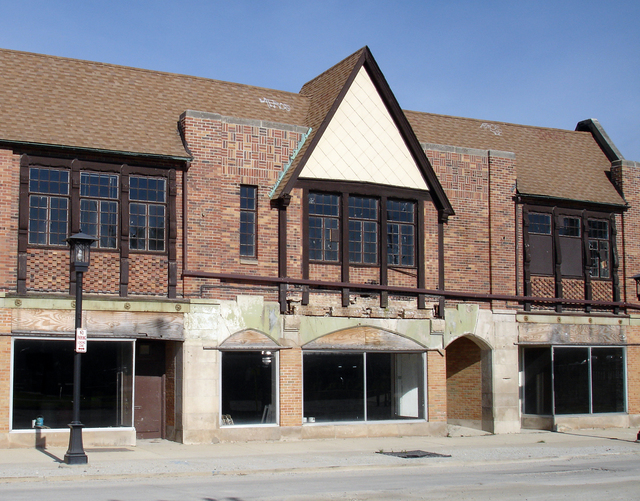 Opened in 1927, the 750-seat Villard Theatre was housed in a building on Myrtle Avenue which also contained a bowling alley downstairs, as well as storefront retail space on the ground floor.

By the 1950’s, the theatre had closed, and the bowling alley followed soon after.

In late-2006, the former Villard Theatre’s auditorium was demolished, but the lobby space and storefront portion of the building remains. Condominiums will be built on the site of the theatre.

Yes that is the place. Just next to the old post office. I think it was open until the late 50’s. It is one block from the original Ovaltine factory which was rehabbed to apartment lofts.

I remember the Villard well. Growing up in Villa Park, we’d save money that we earned collection emply pop bottles in the neighborhood. When we had 25Â¢ we had enough for a Saturday matinee.
The last film I recall seeing there was “Target Zero” (1955) and seem to recall the sound of movie was interspersed with the sounds of the bowling alley beneath the theater.

Here is a link of a picture from the Villa Park Historical museum:

Here are photos of this theater.

The Villard Theatre has recently been demolished. The store-fronts and lobby space have been retained and condos will be built on the site of the auditorium.

It opened on November 24 1927 with Ann Harding in “Her Private Affair”. The theatre was equipped with a Gottfried console organ. Decorative stencil decorations in the theatre were by famed sculpture Alfonso Ianelli. It was re-modeled in 1936, retaining the beamed ceiling and wood paneled wainscoting. The rest of the decoration was Art Deco with wall sconces and the cornice of the auditorium featured alternating panels with sunburst and grotesque masks.

I was just at the old Villard Theater taking pictures today, and was wondering WHY it closed in the 50’s, while others stayed open decades later? Villa Park has a large enough population…Maybe the city fathers were afraid of the movies that were coming out that might be “subversive and detrimental” to their teenagers? ESPECIALLY with a bowling alley on the lower level..
After living in Chicago the first 50 years of my life, then moving to Lombard last year, I think that Villa Park missed a golden opportunity to ressurect the Villard as a theater again. That section of town is a bit quirky, and in my cruising the area when the theater was still intact (but probably an empty shell), I can see why I missed it, not being on the main drag, like the Glen in Glen Ellyn, or the Dupage in Lombard (which lost its' theater portion recently. I guess you folk like staying in and watching TV, instead of getting out and communing with your neighbors!?

Does anyone know what happened to the Villard’s interior decorative elements once it was converted?

The theatre looks like it was really close to the Chicago, Aurora & Elgin Railroad’s Villa Park Station. The CA&E ceased operations in 1957 and that’s possibly why the theatre closed. As the map indicates, it was on a side street and when the CA&E RR abandoned operations, it’s likely what foot traffic the RR generated dried up.

Here is a nice article with pictures on the Villard