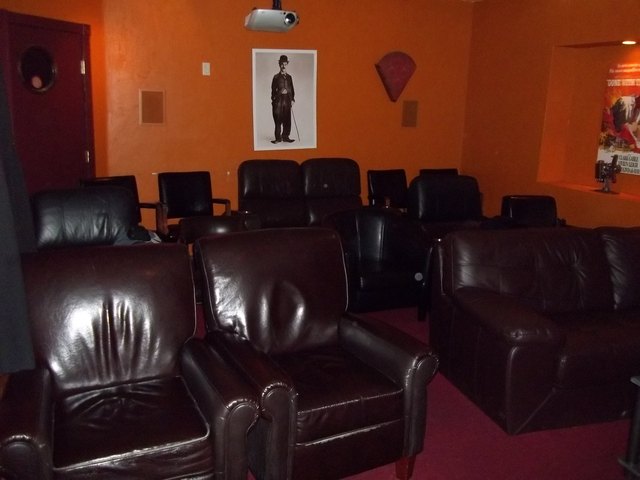 The David Minor Theater & Pub opened on October 18, 2008. The idea: Show great movies in high definition with state-of-the-art audio and visual equipment and offer people fresh cold beer on tap from local brewers and dinner too. The result is a uniquely enjoyable movie theater experience not found anywhere else in Eugene.

The David Minor Theater shows new releases as well as classics and cult-films in two very special theater halls. Theater One seats about 50 people in a setting similar to a mainstream movie theater room but with couches for the front row. There are also small tables at the end of each row that you can move closer to your seat to use while you eat your dinner if you want.

The Livingroom Theater seats about 16 people in a cozy room filled with couches and recliner chairs as well as places to place food and beverages. Both theaters feature large projection screens and full state-of-the-art surround sound systems.

The DMT is technically classed the same as a Pub, you will be carded when you enter and you do need to be 21+, even if you are not ordering any drinks. No exceptions can be made.

This theater morphed from Ronny’s Home Video store during the day and a theater at night. And then finally a full fledged theater in 2008. They screen movies via Blu-Ray DVD only.
Their prices & programming have evolved over the years, they now allow all ages until 7pm. That gives you the chance to see something like Boxtrolls or The Lego Movie with your kids and have a beer at the same time. They also partner with the nearby restaurants, you can order food & beverages from your seat.

The theater is named in honor of David Minor, a family friend. He passed away in a bike accident at the age of 27.