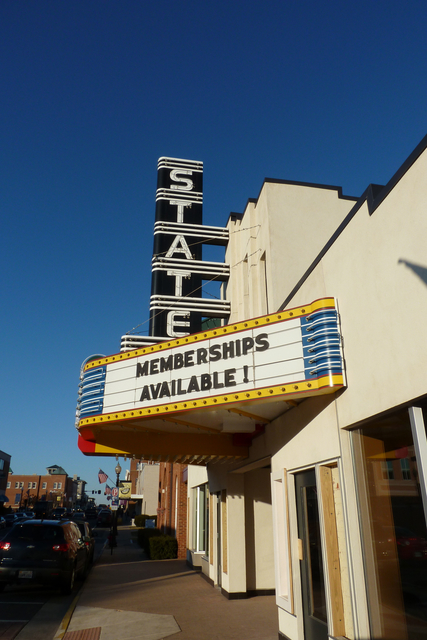 Pitts Theatre was an 873-seat Art Deco style cinema opened in 1938 in Culpeper, VA. It was part of the Pitts' Theatres chain in central Virginia owned by Senator Benjamin Pitts. The manager of the chain was my grandfather, T.I. Martin.

The chain was sold in 1970 to R/C Theatres (owned by Richard Cohen?) He renovated the theatre by removing some seating and covering the walls with gold fabric. After renovation it seated about 900. The balcony was originally used by African-Americans who entered the theatre through a separate entrance at the street level.

The State Theatre is reborn after a nine and a half million dollar renovation. It is a working movie theatre and a world class performance center. Partnering with the Library of Congress, the State Theatre has 35mm and digital projection. The grand opening is set for May 11, 2013, with Lyle Lovett. It was closed in September 14, 2016 ‘until further notice’.

As the owner’s name was Benjamin Pitts, there should not be an apostrophe in the aka above.

The Culpeper house was one of several mentioned in an article about expansion of Benjamin Pitts Enterprises which appeared in Boxoffice of August 14, 1937. The Pitts Theatre in Emporia had recently opened, the Victoria at Fredericksburg was due to open by Labor Day, and the East End Theatre in Richmond was under construction. The as-yet-unnamed house at Culpeper was in the planning stage. I’ve been unable to find anything about the opening in Boxoffice, but it most likely happened in 1938.

R/C Theatres renovated the Pitts and changed the name to State Theatre in 1970, according to Boxoffice of September 21 that year.

The only thing that appears to be happening is that the sign saying great things are coming has been “freshened”.

The State is reborn after a nine year nine and a half million dollar renovation. It is a working movie theater and a world class performance center. Partnering with the Library of Congress, the stare has both 35 mm capability and state of the are digital. Grand opening is May 11 with Lyle Lovett. Starting in 2014 the State and the Library of Congress will be hosting the National celebration of film.m, an annual festival

correction to above a nine and a half million dollar renovation

The NRHP nomination form for this theater (PDF here) attributes its design to a little-known Richmond architect named Nicholas Roney. The form provides very little information about Roney, and attributes only one other building to him as an architect, that being the Bijou Theater in Richmond, designed in 1904 with his then-partner James W. Atkinson.

An article about Benjamin Pitts on this page of Boxoffice for August 14, 1937, lists this theater as one of four hew houses then planned, underway, or recently completed for the Pitts Chain. The others were the East End Theatre in Richmond, the Victoria Theatre in Fredericksburg, and the Pitts Theatre (now the South Theatre) in Emporia.

The State Theatre differs from the other three Pitts projects in lacking a full-width, two-story front, while the other three differ significantly from one another only in their size. I suspect that the other three theaters were all designed by Henry Carl Messerschmidt, to whom we already attribute the East End Theatre. The selection of Roney to design this house is a bit of a puzzle.

The seat count given for the State is inaccurate. It once sat 770, as restored it seats 550. Americans are a lot fatter now. The seats in the restored theater were donated from the Kennedy Center and rebuilt to match the originals. Fully restored to its 1930’s art deco style it is a beautiful house. During the restoration the theater facility nearly tripled in size to add additional facilities including a second “black box theater” which holds 75. The State now has a full schedule of movies and live performance. It is in partnership with the Library of Congress National Center for Media and will be showing films from their collection on a regular basis. The State has digital and 35 mm capability.

All operations at the renovated State Theatre ceased in September, 2016.