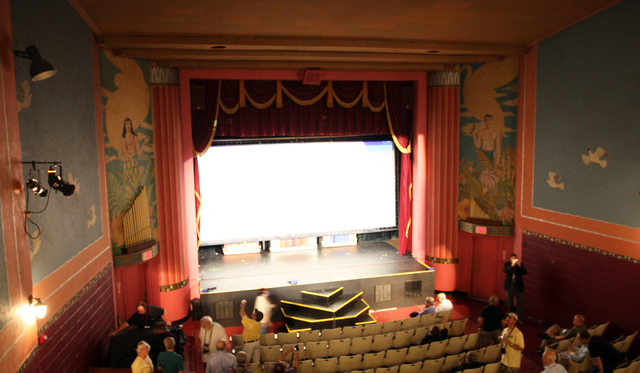 The Vaudette Theatre was opened around 1914. In the 1920’s, it became part of the W.S. Butterfield chain, and continued as a movie theatre into the 1970’s.

It may be an urban legend that the Broadway was the Vaudette, although it did share some of the same owners. Mr. Carnahan (also known as Tip) was spelled with two “n"s. The Broadway is roughly twice the size of the previous theatre, whatever it was actually called. There was a smaller theatre there which predated the Vaudette. It’s name has so far not been proven definitively, but I’d love to see print evidence of this.

Nice to see an old theater that has survived the wrecker’s ball or is in sad shape.

This website is filled with “what used to be”

Here is another 1985 photo:
http://tinyurl.com/newrdu

Please tell us about the ghosts. Is this place really haunted?

The Vaudette Theatre was in another location; just east of the 200 E. Broadway Isabella Bank Building. Seats, curtains and switches were moved to the Broadway when it was built; with a grand opening in December, 1920. Steve Swart

There was a house called the Vaudette in Mt. Pleasant as early as 1908, when it was mentioned in the November 14 and 28 issues of The Billboard, but as spinninglens said earlier it apparently wasn’t this house.

In 1908, the Vaudette was presenting vaudeville, but it is mentioned in several issues of The Michigan Film Review in 1917, when it was running movies.