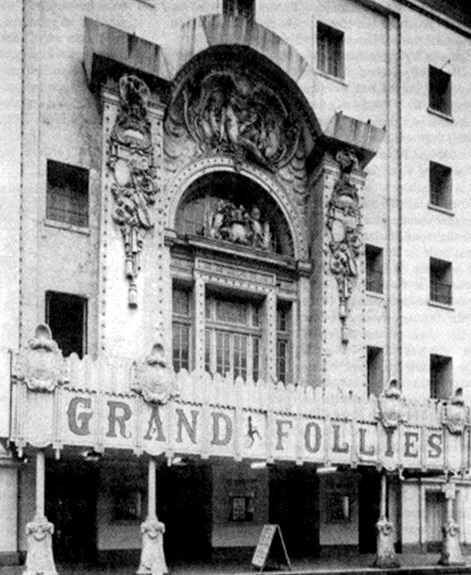 The Grand Opera House dates back to 1852 and began as the Varieties, a unique oval-shaped building that resembled the Barthelems Theatre of Paris. Opened by Joseph M. Field on May 10, 1852, the opulent Varieties had nothing moderate about it – not even the admission charge which eventually discouraged people from attending.

Aside from its oval design, the Varieties had another unique feature. The floor could be raised to slope downard during plays and levelled flat for the renowned Grand Balls held there. It has been the only theatre in St. Louis that had a floor with interchangeable levels – fancy technology for the mid-nineteenth century. The building soon became more popular for its dances than its plays. Unfortunately, St. Louisians did not respond to this expensive theatre which Field had hoped would attract fashionable audiences.

The building closed for three years and reopened under the management of Henry Bernstein. Re-redecorated, the edifice was sold it to Benjamin DeBar, who later named the theatre after himself, DeBar’s Opera House. Four years later, DeBar dies: John W. Norton assumed management and changed the name to the Grand Opera House. Under his seven-year management, the Opera House did well.

In 1884, a fire started in the box office and soon spread to the gas jets onstage. The gas caused an explosion and demolished the building. Little was left.

But the Grand Opera House was rebuilt to the designs of architect Oscar Cobb, and became a burlesque house in the twentieth century. This rebuilding so radically changed the facade that it looked like an entirely different edifice.

Located on the south side of Market Street between Broadway and Sixth Street, the Grand Theatre began by producing opera, then legitimate plays, vaudevlle, movies and started the burlesque shows in the 1940’s, operating as the Grand Follies Theatre. In 1963, the famous house was slated for demolition which proved to be a cultural loss for the city.

The Grand Theatre – the city’s oldest major theatre – had an attractive facade. Classical architecture was its predominant feature. The three story front had two stories of vaulted arches spanning the building and the third story with arched windows. The theatre’s personality was formed over time. It was both nostalgic and beautiful.

A sports stadium project, now Busch Stadium, would be built in its place. Busch Stadium is an attractive architectural edifice. Bush Stadium has also been used as a theatre. When The Beatles came to St. Louis in 1966, the stadium, which held 60,000, was sold out. Although St. Louis lost its magnificant Grand Opera House, it gained a significant addition to the city.

I attended the last burlesque performance at the old Grand. I think I was 17 at the time, and you had to be 18 to get in, unless you were big tall enough to pass for 18. I remember the small orchestra, probably no more than 6 men, and they all wore tuxedos. hanging off the front of the stage near the orchestra leader was a lanyard with a whistle on it, i don’t know if that was used for effect after some of the worlds worse jokes by Billy Zoot Reed, and the like., or they blew it when the cops raided the place so the girls could get their clothes on, During intermission, you were invited to walk next door to the York Hotel Bar and meet the ladies. Since i wasn’t old enough to be in the Grand, I sure wasn’t old enough to be in the bar, darn the bad luck !

1910 article from the St. Louis Globe Democrat about the rebuilding of the Grand Opera House. Also a photo of the theater.

I have added so much more to my blog about the Varieties/Grand Opera house including original articles from its opening night way back on May 10, 1852!!!

By the way the first show to play at the theater was “The Good for Nothing”.

Started going to the Grand when I was 15, around 1962. The feel of history in the place was palpable. Loved the old jokes, which I recycled to great effect. Was a regular visitor with my best hs buds until early 1964, when the doors were shut.

A brief biography of Chicago theater architect Oscar Cobb, published in 1886, lists the Grand Opera House in St. Louis as one of his works. This must have been the rebuilding after the 1884 fire and gas explosion that destroyed the original building.

A long-time before the down fall of American Burlesque—back in the 80’s the 1880’s, this happened on the stage of the Grand Opera House—Lydia Thompson & her New, Grand English Burlesque Company in “COLUMBUS”. (St. Louis Post-Dispatch-March 22, 1889 Page 5 Column 7.)

As a “cinema treasure” the venue was known as the Grand Opera House…this being the teens through the 20s. The movie (a subrun) was but one part of the offerings which included up to 9 acts from the Orpheum Circuit. Theatre became simply the Grand in the 30s when burlesque became offered until closure in the 60s.

After the fire and explosion in 1884 when was the Grand rebuilt and reopened? Because in the 1897-98 edition of the Julius Cahn Official Theatrical Guide there is a “Hopkins' Grand Opera House” listed. Unfortunately, there are no street addresses in this guide. The Grand was run by John D.Hopkins & Charles Salisbury. It had 2,269 seats, ticket prices 10 cents to 30 cents. Auditorium was on the ground floor and had electric illumination. The proscenium opening was 38 feet wide X 30 feet high, and the stage was 44 feet deep. This was a big theater, but I don’t know if it was later the Grand Follies Theatre.

To St. Louisans, it was the Grand Theatre, not Grand Follies which just appeared on the attraction board of the canopy.