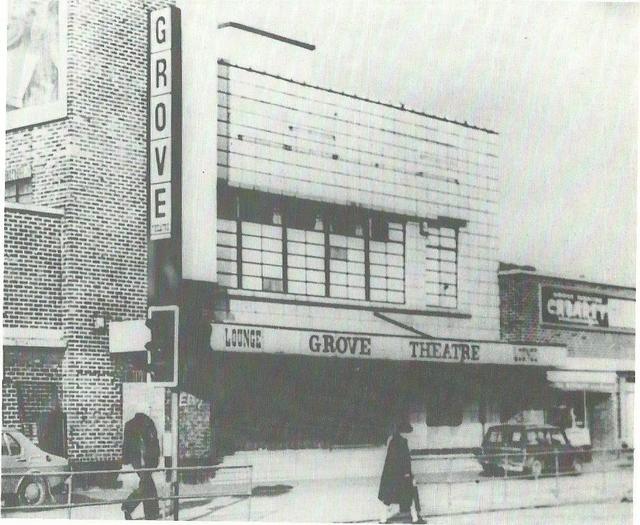 The luxurious Troxy Cinema opened on 24 October 1936 with “Ginger”, starring Jane Withers, charging ‘down town’ prices (that is, double its nearest competitor, the Queens Picture Theatre). A long foyer led to the separate entrance to the front stalls and allowed patrons to queue “in comfort and not in full view of passers by”. The proscenium was 36 feet wide, and there were two dressing rooms.

The Troxy Cinema had a revamp with assistance from the Arts Council of Great Britain in 1965, and changed its name to the Grove Theatre, presenting a mixture of films and theatre, including a Christmas Circus. Films finally ceased in July 1977, but the Grove Theatre continued as a variety theatre.

During the Troubles the Grove Theatre was gutted in a fire-bomb attack. After being patched up it became a carpet warehouse, before being completely destroyed in another attack. In the late-1990’s the site had still not been re-developed. By October 2012, it was being used as the car park for the recently built Lidl Supermarket.