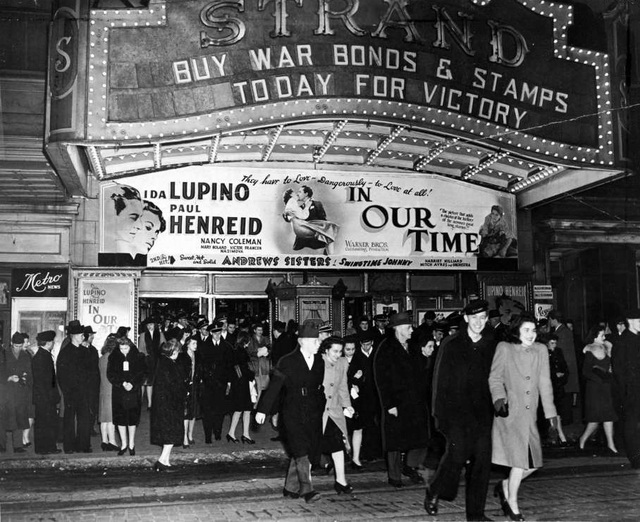 The Mark Strand Theatre was opened November 19, 1920 by the Marks Brothers. It was billed as “New York State’s Most Beautiful Theatre”. Seating was provided for 1,993. It was equipped with a Wurlitzer 2 manual 12 ranks theatre pipe organ. By 1941 it was operated by Warner Bros. Circuit Management Corp. It was remodeled in 1960 to the plans of architect Drew Eberson and the seating capacity was reduced to 1,693.

The Strand Theatre was still operating as a movie palace by Stanley Warner in May 1965, when The Beatles movie “Help” was screened, supported by a 3 Stooges comedy. In November 1968 it was playing “Bullet” starring Steve McQueen.

It has been demolished and the site is now a parking lot.

Its former manager, Al LaFamme (or was it LaFlamme?), was one of the owners of the Unadilla Drive-In when it opened in 1956.

A bit of information about the early days of the Strand appears in this item from The Moving Picture World of December 4, 1920:

“Weekly changes in the stage settings of the new Mark Strand Theatre, at Albany, N. Y., opened November 9, have been decided upon. A dozen or so drops which have been used in the past at the Strand Theatre in New York, will again be used in the Albany Theatre. This week the stage setting includes a view of Holland, while last week Lake Como was used. Prologues will find a place on the program from time to time. Albany audiences have shown themselves responsive to scenics and these will also be featured. Local soloists, who measure up to Strand requirements, have been impossible to discover thus far with the result that New York vocalists are being used from week to week. Mary Mitchell will be featured in the vocal part of the program during the week of November 29.”