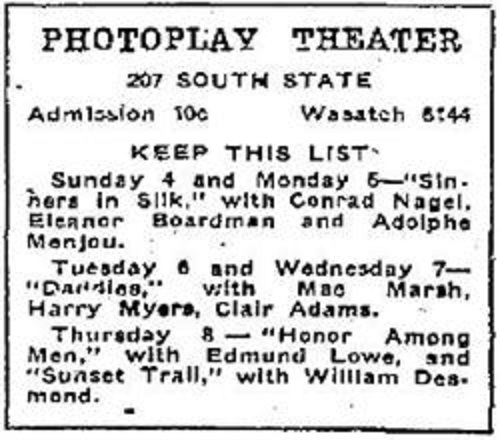 The Photoplay Theatre was already operating in 1926 and is listed in the 1928 Film Daily Yearbook with 250 seats. This theatre operated for a short time in the late-1920’s as the Liberty Theatre.

An earlier Photoplay Theatre was located on South Main Street and opened in 1910 or 1911. Here is it’s (sparse) page at Utah Theatres. One or the other of the Photoplays was mentioned in the July 15, 1916, issue of The Moving Picture World:

“The Photoplay theater is one of the smaller houses of Salt Lake that has enjoyed continued prosperity for several years. It was built by some ranchers and later sold to Mrs. McGrath, its present manager.”

Because the article says it had been in operation for several years, I suspect that it was the first house of that name. I’ve found no other trade journal references to a Photoplay Theatre in Salt Lake City.