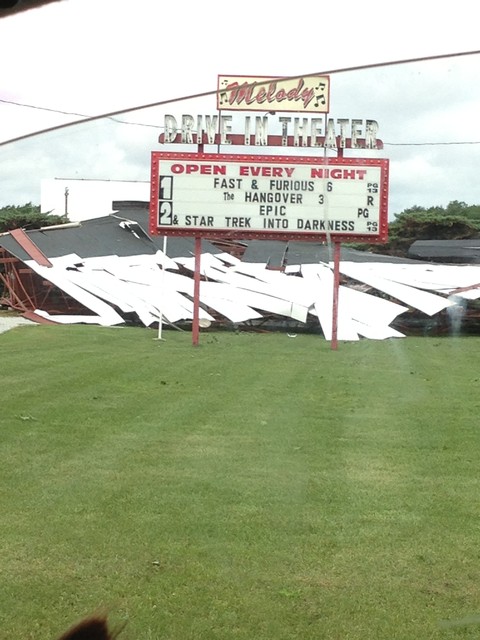 The Melody Drive-In was opened around 1950 as a single screen theatre with a capacity for 400 cars, on what was then Route 3. It was operated by J.R. Hand.

The Melody Drive-In continues to operate today, now as a twin screen theatre.

The Melody Drive-In opened July 22, 1949 as a single-screen 500-car screen operated by G.V. Banta, T. Vitello and J. Richard Hand. To celebrate the showing of “The Music Man,” star Forrest Tucker made a two-day personal appearance on Jul 17-18, 1959. The Drive-In continued into the digital projection era.

Has something collapsed behind the marquee?

The screen tower came down. They installed a new one. Look at the pictures.

There’s an old YouTube video, uploaded in 2010 but apparently from 2006. Owner Fred Heise says he has owned the Melody since 1970, “bought it from my father that year.”

One more thing: The IMPAs listed the Melody as a single-screen drive-in through its last list in 1988. When did they add a second screen? It had to have been before 2013, when a storm knocked down one of the two screens.