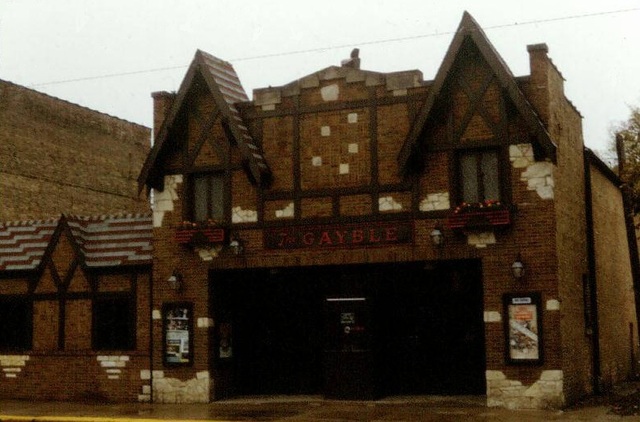 One of North Judson’s most identifiable landmarks met the wrecking ball Wednesday, as the historic Gayble Theatre on Lane Street was bulldozed to the ground. The theater, with its unique gothic facade, was one of the first movie theaters to have “refrigerated air,” the forerunner to air conditioning.

The theater was operated until the late 1970s by John Woytinek, but it had not been in use recently. In the ‘30s and '40s, the theater often showed double features on the weekend. For example, a two-week August run in the '30s included Edward G. Robinson in “The Amazing Dr. Clutterhouse,” and teen-ager Jackie Cooper and Maureen O'Connor in “Boy of the Streets.” Another twin bill was Joe Penner in “Go Chase Yourself” and George O'Brien in the western feature “Border G-Man.” The building was badly deteriorated and needed to be razed. Plans for the site are up in the air.

I used to lease this theatre from the Woytineks and it didn’t do very well. Beautiful theatre though! The concession area was not handy to the auditoreum. It was added later,when theatres started selling food.