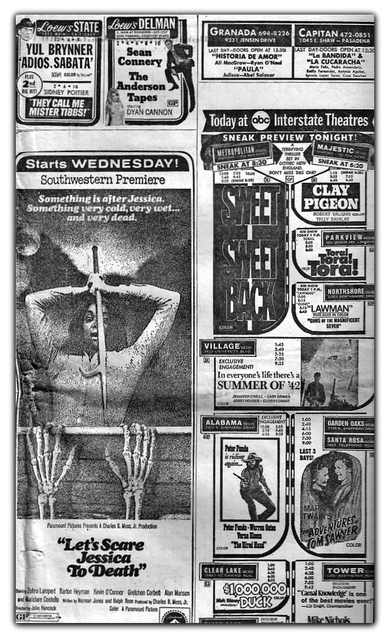 The Capitan Theater was opened on November 15, 1949 with Brian Donlevy in “Impact” & Monte Hale “San Antone Ambush” (Monte Hale appeared in person at the opening). It was operated by Phil Isley Theaters. Located in the Pasadena district of Houston, it has a tower feature on the left of the façade, with a nautical mural on the face of the façade. Internal murals on the auditorium side-walls were by Nat Smythe. Seating was provided in orchestra and balcony levels.

The Capitan Theater was closed as a regular movie theatre in 1969. In 1970 it began screening adult movies and also had a period screening Spanish language films. It was closed in 1976. I became a church, and later reopened screening Spanish language movies again into the 1980’s. Plans for renovations were announced in 2003, but to-date, have come to nothing. The exterior is beautiful, especially with the neon lit up.

It holds many wonderful memories for us Boomers…and before!

From the early 1970s a newspaper ad for the Capitan Theater in Pasadena.

Don,
Are you from the Houston area?
Thanks,
Jeff in Texas

Don, My late father was from Post 1919-1939. I was able to visit Post some years after my dad died. Got a couple of theater pictures there. I have not yet checked to see if they are posted…but I would imagine you have beat me to it! Thanks for the reply. Jeff

From Pasadena Texas a photo of the Capitan Theater.

My father was projectionist here during the 50s & 60s. I used to ride my bike there every Saturday and spend the matinee there with him in the booth, where he taught me to splice film and use the equipment. I had free passes to give away which made me pretty popular. I remember the manager, other projectionists, the lady selling tickets, the huge speakers behind the screen…pretty cool to a 12 year old boy! Sam

The first phase of the Corrigan Center was built in 1948 from 1001 Shaw Ave. to the Capitan Theater’s 1045 Shaw Ave. address in the north section of Pasadena. Architected by Raymond F. Smith, the Capitan would open Nov. 19, 1949 by Phil Isley of the Isley circuit and who would open the very similar Granada Theater in Houston. The first films were “Impact” and “San Antone Ambush,” with star Monte Hale of the latter film in attendance. The murals by Colville Smythe of L.A.’s Nat Smythe & Son had oceanic-themed walls with Neptune on a sea horse and Europa riding a bull among the dolphins while the ceiling had a giant mermaid and compass. Seashell-themed carpeting and a spacious and inviting lobby had to be a pleasant surprise for moviegoers. The 11,529 square foot theater was quite a jewel for Pasadena.

The Capitan became a church for a period in the 1970s and when that ended, new theatrical life came from Hispanic film exhibition in the 1980s. That would be the last film projected in the theater. The three-time loser combined with the economic downturn of the Corrigan Center area left the theater in deep trouble and boarded up. In a last ditch effort to salvage the theater, the City of Pasadena bought the Corrigan and devoted $190,000 to fixing the exterior of the theater which remained beautiful from the outside from 2000 to 2014 awaiting a new owner. But the city’s gamble didn’t pay out as the interior of the theater deteriorated and the city’s economic fortunes weren’t too bright. Given the theater’s dismal track record over the past 45 years, the city sold the Corrigan Center for a loss in July of 2014 to a chemical company based in New Jersey. Just prior to the announcement, the theater’s marquee, theater boxes, doors and many other elements were stripped from the premises. There was little doubt that the theater – though still standing in 2015 – would be a casualty in the near future barring an a miracle by Neptune, Europa, or a contemporary capitalist.

Linkrot repair: The February 4, 1950, Boxoffice page about the Capitan Theatre can now be found at this link.

This place is going to waste and being slowly dismantled. I have seen no improvements, but if there was City and community support, I’d like to see it changed to a Jam Band, Jamtronica, Electronica venue along the lines of the always busy Joy Theater in NOLA. It’s become an icon for live music in NOLA and it would mean new customers for Pasadena businesses and revenues for city, county, state and federal entities.

Email me for more.