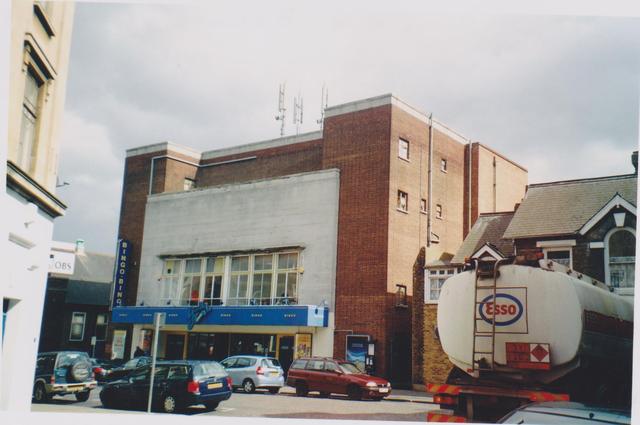 Located in Gillingham, Kent. The town’s last cinema was built for fire chief and pawnbroker Frederick White. As the Embassy Cinema it had a stage and 2 dressing rooms, and opened on the 4th October 1936 with Mr. Deeds Goes to Town" and “Don’t Gamble with Love”. Seating was provided for 1,276 in the stalls and 468 in the circle The cinema also contained a ballroom and café.

Oscar Deutsch’s Odeon Theatres Ltd. took control on the 12th March, 1936, renaming the cinema Odeon on the 16th June, 1946. It was one of many to transfer to the Classic Cinemas chain, and was renamed Classic in December 1967. A Tatler Cinema Club was introduced in 1970 for films like “Teenage Nympho”. Strippers walked on the aforementioned stage.

Roy Squire leased the cinema from Frederick White’s widow and it was re-named Embassy Cinema again from 13th June, 1977. The last film ran through the gate on 17th September 1977 and it became a bingo club. A school of Dance used the former café. Coral took over the bingo and then Gala Bingo, but when a new Gala Bingo Club was built in Chatham, the cinema became Rileys Pool and Snooker Club which had closed by 2017.

Rileys closed venues from 2014 after being in administration. It is not clear how long this club survived but it currently boarded up (Sept 2017)

Last one standing in Gillingham too!!