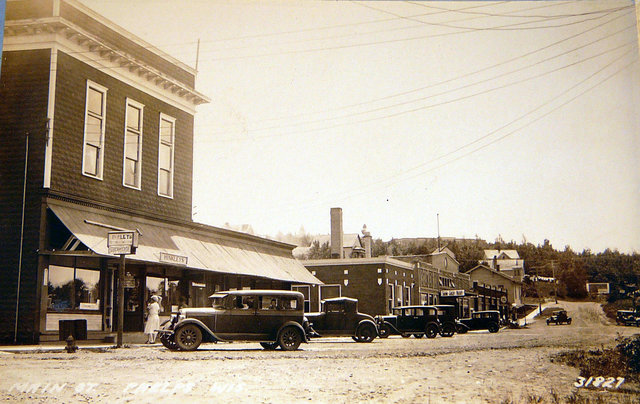 Phelps is a quiet unincorporated lakefront tourist community of perhaps 1,300 within the Town of Phelps in Vilas County, Wisconsin, and yet its rather sizeable (for such a small business district) hometown theatre still exists, marquee and all, nearly as it was built as the Happy Hour Theatre in the 1920’s with two adjoining storefronts. (One, a barbershop, was in business from the mid-1930’s to the mid-1950’s.)

Information is very sketchy on the Northern Lakes Theatre’s history, but in the mid to later 1920’s the theatre was managed by an Alvin Weed. By 1959, it was owned and operated by Joseph E. Peterson, who was offering it for sale and announced that it would be closed that winter but was to reopen in the spring of 1960.

Any information on this interesting theatre building is welcome. (The large corner building in the photographs was the Lakeland Hotel and was demolished in 2008.)

(Film Daily, May 25, 1936) The Northern Lakes theater, Phelps, has opened for the season and will play pictures every night starting June 13. The house is installing a new cooling system.

The NORTHERN LAKES was called the HAPPY HOUR Theatre in the early 1920s.

January 1929: Phelps Amateur Night Held. Amateur night at the Northern Lakes theater was another success. The first number was by James Mindy and his daughter, Margaret, of Rhinelander. Mr. Mindy was at his best and gave the patrons what they liked, real comedy, while his little daughter was undoubtedly the main attraction of the evening, with her dance numbers. The crowd repeatedly called her back for more, and each time she gave the audience a new and graceful step. Mrs. Tony Tietzol, a woman 61 years of age, gave two song and dance numbers pf her own compositions that won the hearts of the parked theater. Alvin Wenzel, the last one on the card, played the part of a small country town boy and his act was one of the best of the evening.

As of July 2020 there is a plaque outside of the theater stating that a Restoration was in progress as of 2016, but the building is simply abandoned.