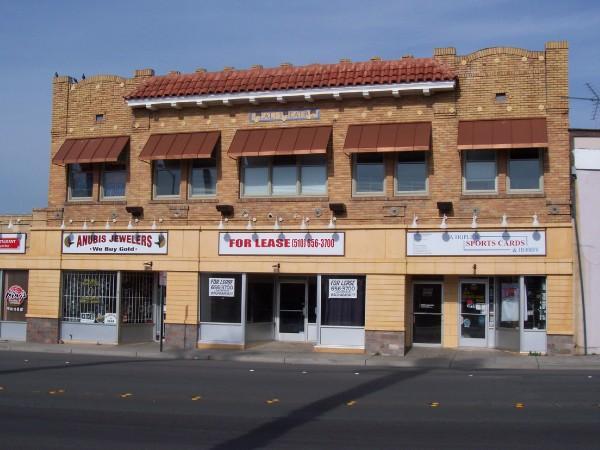 This theatre was built in approximately 1915 in the town of Irvington (now a part of Fremont). Long closed as a theatre, the building is now used for small retail stores.

The upper half of the facade still retains its original brickwork, and a terra cotta glazed LEAL THEATRE sign up near the cornice.

According to the “Made of Bricks” Web site. The address of the Leal Theatre is: 3911 Washington Blvd. Fremont, CA.

My Great Grandfather Frank Albert Leal built the Leal Theater in approx. 1915, it opened for business around 1918. The idea for building the 1st theater between Oakland and San Jose come to him after watching movies being shoot in The Niles, Ca, also now part of Fremont. The family ran the theater with my Grandmother Mary E. Freitas playing the organ and my Grand Aunt Anna Perry working as an usher and many cousin working the ticket window, etc. The Theatre was open until my Great Grandfather’s death in 1944, but was reopened by the family shortly after that and ran until around 1954. My Mother Dorothy A. Misener was actully in the Theater watching a movie in 1945, when her name flashed on the screen, she had a phone call, to doulble with a cousin that was an leave from his ship docked in S.F. The double date was with a tall good looking Navy Man who as you may have guested was my father Jack Misener. The building is indeed still there, in the 1980’s the City Fremont and the Irington Township historical Society earmarked it as a Historical Landmark.

Many, many years later I have followed my Great Grandfather into the business and I am now the General Manager of Platinum Theatres Dinuba 6 in Dinuba, Ca near Fresno. It is 6 screen, state of the art Theatre built in 2003. Frank would be so proud.
Thank You for reading,

A book called “Images of America, Irvington and Fremont, CA”. Page 66, at the bottom.

The Leal Theatre might have been built a bit later than we thought, or might have been rebuilt in 1922. This item is from the February 4, 1922, issue of Building and Engineering News:

Mission Street was later renamed Washington Boulevard to avoid confusion with Mission Boulevard. Architect Henry A. Minton is remembered primarily for the numerous buildings he designed throughout the Bay Area for the Catholic Church and for the Bank of Italy (Bank of America.) The Leal was probably the only theater he designed.

I see first floor is all retail, but what’s on the second story? I know that a lot of old buildings like this have the upper stories converted into loft style apartments.

RangerRobert: The address of the upstairs is 3909 Washington, and it still contains office suites. Google the address to see listings for some of the tenants.