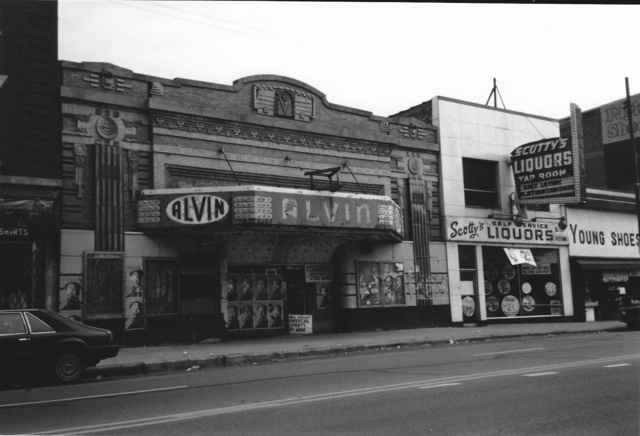 Located in Chicago’s West Town neighborhood, the Alvin Theatre opened in 1914 and sat 540. The theatre was originally built for the Lynch circuit and later was part of the Balaban & Katz chain. The Alvin Theatre was operating as a Spanish-language movie house during the 1970’s. The former theatre building was until recently used as a retail store. In 2016 it was converted into the Shapiro Ballroom which opened October 3, 2016.

the Shapiro Dance Studio, available for wedding rentals too. I think the marquee will remain, somehow, to open late this year?

Here is a THSA image of the Alvin

Hey! I am the owner of The Shapiro Ballroom coming soon to the Alvin Theater. We will be an event center and dance studio. I am looking for information on the history of the theater. Does anyone have any resources?

Dont worry the Marquee is coming back. We are currently fundraining to restore it.

There’s not likely to be much out there. The Theatre Historical Society in Elmhurst may or may not have anything. I find that the building permit was listed in the November 9, 1912 issue of American Contractor, so it was likely opened in 1913. The architect was David Saul Klafter, who designed a number of mostly inexpensively-built small movie theaters in the early teens. The most recognizable of these today is now the Fluevog store in Wicker Park. The theater was built for owners Louis and Samuel Ogus and Frank Rabinovich and leased to Alvin Alberti. The building was sold to Herman R. Misch in November 1914. It was being run by George L. Levine and showing Triangle and Universal Pictures. The association with Triangle may explain the triangle decorations on the exterior. George Levine was an interesting guy who grew up with the motion picture industry. He started as a peanut boy at the Iola Theater in Wicker Park as a peanut boy and became assistant manager there by age 12. By 16, he became manager of the Alvin. At 19, he left to work for Universal’s Chicago branch as a salesman. At 21, he became manager of their short film distribution in Chicago. The next year, he became manager of Universal’s Milwaukee Film Exchange. At 28 he was promoted to manage all short subjects for Universal in New York, but moved back to run Milwaukee again after a few months of outcry. He remained Carl Laemmle’s right hand man in the Midwest until 1935. He remained in the business, operating theaters independently until the 1960s.

It would be great if you could post some renovation photos here.

We are raising money for the restoration of the marquee. If you get a minute to read more about us and share!

The Shapiro Ballroom is scheduled to open October 3. Looks like it was gutted.

My dad owned the theatre in the 70s. It was Spanish movies. He also owned Hub theatre. Sold it in 78'

There are a couple of interior pictures on the website. It’s basically a large open space with exposed brick walls.