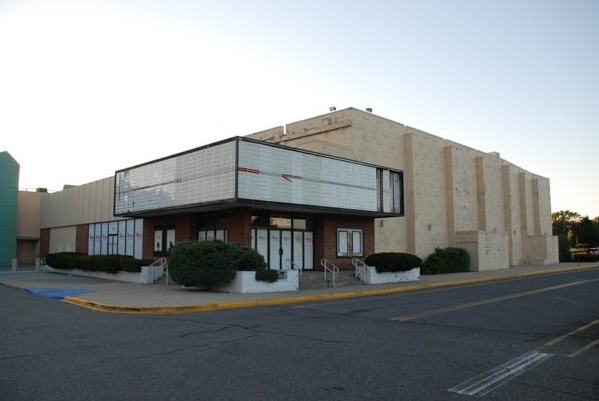 Opened on August 2, 1967 by Loews. The opening movie was Lee Marvin in “The Dirty Dozen”. Once a single screener, a wall was installed down the middle to convert this to a twin on October 29, 1978. It was closed in the mid-1990’s screening Leonardo de Caprio in “Titanic”.

The lobby was converted into a leather store, while the theatre itself remained completely intact behind a gated area. The theatre was demolished in February 2014 to allow for improvements to the mall.

I went there to see the return of Sean Connery as James Bond in “Never Say Never Again!”.1983 was a big year for Bond movies,Roger Moore’s"Octopussy"was also released that year.

In what year was this theater twinned?

As a teen I enjoyed walking back and forth through the length of the South Shore Mall, (when I wasn’t in the video game room), and at one end there was this cinema standing apart from the mall several yards outside a side entrance/exit like my landmark, especially since I love movie theaters, for having reached that point.

This is where I saw the first three Star Trek movies, II and III being thankfully better than the first. During “Star Trek III: The Search for Spock” (1984), I had the haunting experience of sitting next to my father while Kirk’s son, also named “David”, (spoiler alert), is suddenly killed and we see Kirk’s paternal pain. Maybe that was the first time I’d seen that sort of loss portrayed, and I awkwardly glanced at my father imagining how he might feel if something happened to me.

This is also where I saw my first Star Wars movie, “The Empire Strikes Back” in 1980, (with “Episode V” included in the opening crawl, and it became known that nine episodes are intended, with IX coming soon these decades later).

Being a Star Trek fan who had watched reruns of the original tv show everyday after school, I wasn’t interested enough in seeing the original “Star Wars” in 1977, but came back here for its re-release in 1981 (with the new subtitle “Episode IV: A New Hope”). I have a vivid memory of Darth Vader’s ominous mask looming large on the screen while he piloted his TIE fighter.

The final time I visited the Loews South Shore Mall Twin in 2000 after a few years away, I found it closed with the lobby of the still intact interior occupied by Indian or Sikh or Pakistani folks selling maybe rugs or items of their culture.

Inside I approached the ticket booth and took a moment to silently relive the times I bought tickets there. I almost said I’d like one now, then thought the joke would be lost in translation, yet as I turned to leave the empathetic eyes of the man wearing a turban let me know he understood I had come for nostalgic reasons.

As I prepare to go see the just released “Episode IX: The Rise of Skywalker”, the final entry in the Star Wars saga, I’m thinking about this cinema, the South Shore Mall Twin, where I saw the first Star Wars movies almost 40 years ago in the early 1980’s (see my previous comment directly above).

The Loew’s South Shore Mall theatre opened on August 2nd, 1967 with “The Dirty Dozen”. It is the first suburban theatre on Long Island (outside NYC limits) for Loew’s. Grand opening ads posted.

Going back in my “Way Back Machine” to the late 70’s, the theater was located all the way in the back of the parking lot and it was a good way from the rear entrance of the mall. In the early 80’s the mall has received it’s first expansion and that out the rear entrance much closer to the theater. Then in the late 90’s the mall received another expansion and this was a big one as it added two more anchor stores, Lord and Taylor and Sears. now the hallways built passed the Loews theater and was behind the Lord and Taylor and Sears buldings. This is w by in later years it do was not readily seen from the road and many thought then the theater was gone, but it closed shortly after. Titanic was the last movie to show there. The building remained standing for a long time after it closed, but it was eventually diminished in 2014.

Sorry for the errors, but I was typing blind due to an issue with this site in which the screen scrolled down as I type. I had meant to say, in the second to last sentence: This was why, in later years it was not readily seen from the road. Also I meant to say demolished, not diminished.

jukingeo I often go back and retype an entire comment when finding errors after the fact or getting more information. It would be nice if, in a future upgrade, Cinema Treasures would provide an edit capability as is available on Facebook, rather than just “remove”.