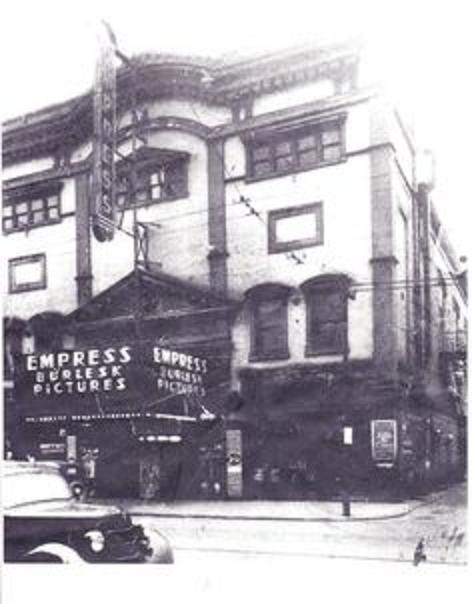 Built in 1846 as a Presbyterian Church, it later became the Vine Street Congregational Church. The New Empress Theatre was opened December 27, 1909 presenting vaudeville, burlesque and by 1912 film were also part of the program. By 1917 films were the major part of the program. It seated 300 and closed in 1929. On March 12, 1937 it was renamed Gayety Theatre featuring burlesqe and movies. The site is now an office building.

Allen J. Singer’s Stepping Out in Cincinnati: Queen City Entertainment 1900-1960 (Google Books preview) says that the Empress ran “B” movies in between burlesque shows. That was pretty much standard for most burlesque houses by the 1940s, probably done more to give the performers and the band some break time than to bring in paying customers.

In the 50’s and 60’s, the burlesque houses in downtown Chicago ran movies between live shows. Actually, a pretty common practice in most cities.

The building housing the burley house had its roots back to 1846 as a Presbyterian church. Then it became the Vine Street Congregational Church. But the new owners of the property created The New Empress Theatre and had something completely different in mind. The New Empress launched at this location on December 27, 1909 with live vaudeville and bawdy burlesque. Films were a key component of a night’s features by 1912. The Louis XV styled theater may not have always fit the stage presentation, but it entertained many for its 60 years of operation. The theatre featured live acts and, by 1912, the theatre was showing silent film shorts. By 1917, film had become the top of the card as attractions. The Empress mixed exploitation films or sporadic filmed sports events with regular burlesque in the early sound era.

At the end of February of 1937, Arthur Clamage’s circuit of burley houses took on the Empress. On March 12, 1937, the Empress was renamed the Gayety Theatre with four stage shows daily and a midnight show which featured motion pictures between acts. In a high profile final set of shows on April 11th and 12th, 1970, Minsky’s Burlesque ‘70 graced its stage as acts ranging from Abbott & Costello and Rose la Rose had in the past. The demolition crew, noting the theater’s history, placed a sign on the building saying, “Take it down. Take it all down.”

Like many houses called the Empress Theatre during this period, Cincinnati’s Empress opened as a Sullivan & Considine vaudeville house. There is thus a fairly high likelihood that the plans for the remodeling of the old building were by Fuller Claflin, who was the circuit’s principal architect, though a Cincinnati architect would probably have been hired to act as supervising architect.