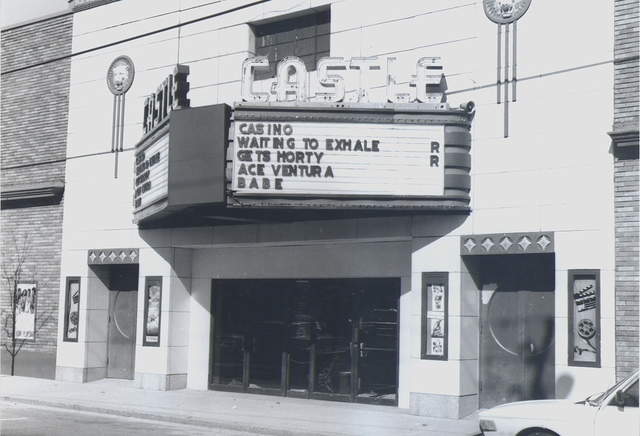 The Castle Theatre was a neighborhood vaudeville playhouse, which was built in the mid-1920’s that switched to movies only by 1930.

Over the years, it was converted into a triplex, and most recently, converted into a cinema pub and cafe. It was closed in 2004. It later became a pizza place, but that had closed by mid-2022.

RKQ I really hope you’re still active on this site. I’m a graduate of entrepreneurship and intend to go to grad school for Historic Preservation. My focus has always been on historic theaters. I would love to speak to you about your time owning and operating Castle Cinema. Does anyone know what happened to the original Marquee.

From time to time I check in to see new comments. The Castle is still standing,although in ruff shape. Seeing the marquee gone is sad.I assume it was removed for safety reasons.I remember the summer I spent up on a ladder, gently removing the neon letters, scraping off the chipped paint and gently replacing each letter. It was important or me to have the “Castle” letters light the night. When we sold the theater in 2000, the marquee was in decent shape. Over the years the front had been hit by city snow plows,but it was always repaired.

I recently purchased the Castle Cinema at 1039 Chalkstone Avenue, Providence and would welcome the opportunity to speak with anyone who owned or worked for the Castle Cinema when it was in operation. I can be reached at 401-413-7489.

I am owner of Cabaret, SpeakEasy, Big Band, Vaudville and Circus types entertainment love to see The Castle alive with entertainment of this type. If interested love to discuss joint ventures you may contact me 401 641 2234. Thank you for your attention to this matter

Is this property currently for sale or in the process of being renovated?

This theatre was used on February 22, 1987 by the Italian Film Society of RI for a showing of the Italian film comedy “Pizza Triangle: A Drama of Jealousy.”

The pizza place is now closed according to their Facebook page.