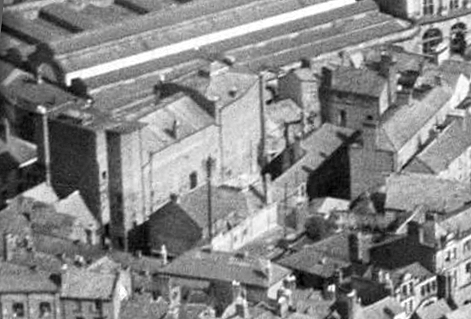 The following (in quotes) is from Theatres Trust.org.uk

“The site has been occupied by a theatre since about 1791. The 1898 theatre incorporated some fabric from the second 1834 New Theatre on the same site. The axis of that theatre lay parallel to Shoplatch. The stage was to the left. The façade, which was incorporated by architect J.P. Briggs, originally had three statues in niches, but was altered after a fire in 1945. It is 30.5m (100ft) long, now rendered with tall windows but, even in its altered state, it is recognisable as deriving from the original 1834 design. The two end and opposite long walls are of red sandstone blocks with red brick at the upper levels suggesting that during the rebuild of 1898 all the walls were raised and a fly tower added. Remains of a winch system for hoisting scenery to the first floor stage level can be seen on the stage right outer wall.

The theatre never reopened after the 1945 fire but was gutted and became a shop. Floors have been inserted internally corresponding more or less to the original stalls, circle and gallery levels. The lower two are used as a shop, the upper two for storage. The proscenium opening is visible on floors one and two. On the top floor, part of the auditorium ceiling can be seen, at the centre of which is the outer ring of the former dome.

The building is not rectangular. The stage was considerably narrower than the rear width of the auditorium. The gallery was probably around 11m (36ft) wide whereas the rear stage wall is only 7.4m (24ft 3in) wide. The stage grid, fly galleries and safety curtain guides can still be seen."

The above website gives 1912 as the year of conversion to the Picture House. Kinematograph Year Book 1914 has the 700 seat Picture House operated by Cinema Theatres Midlands Ltd., but also has “Theatre Royal & Hippodrome” operated by “W Yates G®egory”. KYB 1928 lists only the Empire Cinema and the King’s Hall in Shrewsbury; odd. KYB 1931 list the previous two and the Central (still on silents). KYB 1935 has the Royal County with 650 seats, and “FI” sound, operated by the Regent Circuit of Regent Street, London. KYB 1937 has the Kings, Empire, Royal County and Granada (all of Shrewsbury’s cinemas) owned by Shrewsbury Empires Ltd and operated by the Granada circuit. The Royal County has a 17ft6 wide proscenium. KYB 1942 and 1945 add nothing new. After a fire, the building was gutted, with the façade retained, and converted into shops with apartments(?) above.