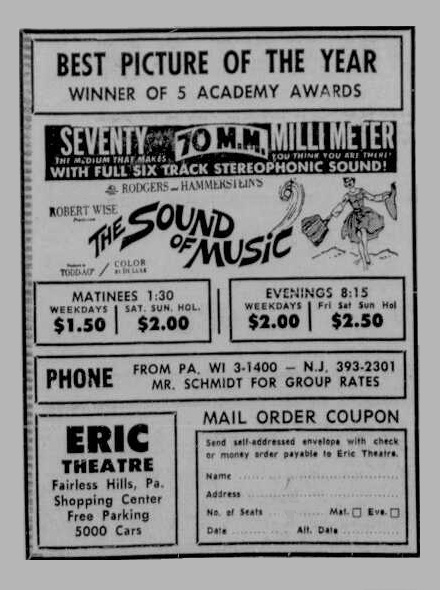 Located in the Fairless Hills Shopping Center, this early Eric theatre opened on December 25, 1963 with “Move Over, Darling”. It reopened as a twin along with the Eric Lawrenceville Twin on November 12, 1976.

i remember, in 83, the theater reopened after having a third room added, and had return of the jedi on two screens. they also had a mini golf course and go carts towards the end of the theater’s existence.

just a question, when did they expand to 5 rooms, i think when the theater closed it was still 3 rooms. anyone verify this.

Boxoffice of July 6, 1964, ran a two-page spread about the Eric Theatre in Fairless Hills (link which might or might not last, Boxoffice being an unreliable online presence.) The 1,400-seat house featured a 28x60-foot curved screen and a box office located in an enclosed storm lobby.

The project was designed by the King of Prussia-based architectural firm Brugger & Freeman (John T. Brugger, Jr. and David Dean Freeman) who also designed the King Theatre in King of Prussia, opened a few months earlier than the Eric.

Samuel Shapiro had operated both indoor and outdoor theaters in Pennsylvania and New Jersey for some time, but had only recently formed the Sameric Company and was rapidly expanding his operations. The King Theatre was the first in his new chain, and the Fairless Hills house was the first location to have the name Eric Theatre.