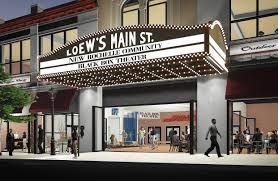 Loew’s Theatre is a historic theatre located on Main Street in the Downtown section of the city of New Rochelle in Westchester County, NY. During the 1920’s, the ‘Golden Age’ of the movies, there was a tremendous boom in the construction of motion picture houses and theatres built in New Rochelle during this period were only slightly less elabotate than the grand movie palaces found in big cities.

Loew’s Theatre at 585-599 Main Street was built in 1926, and the RKO Proctor’s Theatre across the street was built in the following year. Both buildings share the basic design of a long two-story facade containing shops at street level, with the entrance to the theatre itself emphasized by decorative elements and the marquee,

The design inspiration for the Loew’s Theatre is Spanish, interpreted through elements such as clay tile roofs and a Baroque parapet over the entrance. The 2,500-seat theatre was designed by leading theatre architect Herbert J. Krapp. The theatre feature vaudeville and live shows with renown performaers and celebrities such as Bob Hope, Lucille Ball, Bette Davis, George Burns & Gracie Allen, Sophie Tucker, George M. Cohen, Olivia de Haviland and Will Rogers.

The Loew’s Theatre site mirrors the tale of many early American suburbs. New Rochelle, mostly known as a bedroom community serving New York City, saw tremendous growth and success during the first half of the 20th century. At that time the Loew’s Theatre was part of a flourishing Downtown benefitting from its affluent residents and proximity to the city.

The Loew’s Theatre was closed in the late-1980’s. By then, it had been converted into a twin-screen and was operated by RKO. It later operated as a nightclub named Palladium, which closed around 2000.

In 2016 plans were proposed to demolish the auditorium for mix use housing and a ‘black box’ theatre, retaining a restored façade and a replica of the original marquee. In early-2017, the auditorium and lobby were demolished, leaving only the facade standing.

The front facade is now being cleaned back to its shiney white. The box office area remains boarded up. What is going in here?

hELLO! Please could you tell me how is the interior nowadays? it could be use again as a theater ? thanks

This theatre is still standing but redevelopment in this part of New Rochelle is sluggish. It is located across the street from the former Brandt’s Town Theatre that is currently being use as a furniture store in the lobby. The theatre is twinned but could be a nice cultural art’s centre.

NEW ROCHELLE – The proposed $120 million Loews Theater development would usher the city into what officials hope will be a new age of the downtown while paying tribute to its historic past.

The developer RXR Realty was in front of the planning board for the first time Wednesday night to discuss its plans to turn the defunct theater at 587-599 Main St. into a 28-story, mixed-use development with an accompanying black box theater.

Right now the property includes two buildings with frontages along Main Street and Huguenot Street. Seth Pinksy, vice president of RXR, said the new development will be one building with two entrances and a shared lobby.

The historic portion of the property is the facade of the two-story building on Main Street. That was once the entrance to the Loews Theater, which opened in the late 1920s.

City historian Barbara Davis said the theater anchored the downtown of “one of the most prominent cities in the country” during that time.

The facade survived a number of uses since the theater permanently shut its doors in the 1970s, including the failed nightclub, the Palladium, which closed about 15 years ago.

That will be the entrance to the multipurpose performance space that city officials hope will be the new anchor to the social life of the city’s revitilized downtown.

Davis said she worked with the RXR Realty development team and said she was “pleasantly surprised and pleased” with the plans.

Davis called the buildings along Huguenot Street an example of “bad character.” Currently, it’s apartment buildings and a warehouse.

Pinksy didn’t give a rent range but said it will be market value for the area, which he said is cheaper than rents in New York City.

The project could be approved as early next month. Pinksy said he hopes to break ground before the end of the year and be completed within 22 months.

“It’s been a great experience working with the city,” Pinsky said. “Our experience confirms our enthusiasm we had before we started this. The process has worked the way the city said it was going to work.”

This theatre has now been demolished for retail and housing re-development. I am not sure if any of the façade was saved. More details to follow

NEW ROCHELLE – Construction will begin next week on the centerpiece of the city’s $4 billion development plan as officials continue to look for ways to reshape the downtown, including ideas for a new library and more high-rises.

A $120 million, 28-story mixed-use building at 587 Main St. will be located at the site of the historic former Loews Theater. It will include 280 apartments — 28 of which will be affordable spaces — a 10,000-square-foot entertainment space including a “black box” theater, 17,000 square feet of commercial space and a 234-space parking garage. Long Island-based firm RXR is the developer.

“This project demonstrates that the visionary downtown plan we adopted last December is working,“ New Rochelle Mayor Noam Bramson said. "It’s just one part of a larger transformation — the most ambitious in our history and the most exciting in the Hudson Valley.”

City officials approved a master development agreement in December 2014 with RDRXR, consisting of RXR and firm Renaissance Downtowns. In December 2015, the City Council passed a new zoning plan that would make a downtown overhaul possible.

“This project, along with many others, is powerful evidence that the new opportunities and potential in New Rochelle are now seen clearly by the development and investment community far and wide,“ Bramson said.

Seth Pinksy was one of the people who helped get the Loew’s Kings in Brooklyn restored. It’s sad that he also helped another former Loew’s theater be destroyed.

Uploaded a companion photo to the original proposal which would have incorporated the Loew’s marquee.

The theatre has been demolished but the facade and marquee remain as you can see in photo I added. You can see right through. Please replace picture on home page with one showing theatre in it’s glory.

Many astonishing period and demolition photos at https://www.facebook.com/media/set/?vanity=howvideo1&set=a.1643325715850740 , posted this past January.