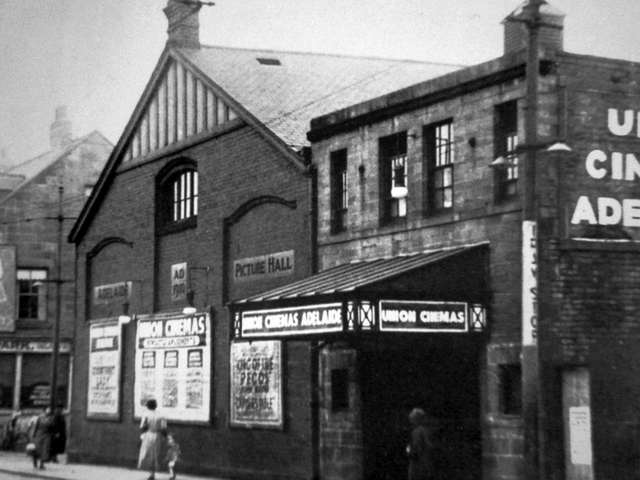 The Adelaide Picture Hall, on Adelaide Terrace (part of Elswick Road) on the corner of Maria Street, was built in 1910 by W.H. Rewcastle, a fishmonger, and opened on 17th October 1910. It was Benwell’s first cinema and had 640 seats.

It was sold to Charles Faith in 1919; and a two storey stone-faced annex was built to the right of the hall to form a foyer with offices above.

In April 1928 Faith sold the cinema to two London cinema owners for around £10,000. The Adelaide Picture Hall was the third Newcastle cinema to introduce sound.

In 1931 Union Cinemas took ownership under the name of Benwell Cinemas Ltd. By this time the Adelaide Picture Hall was in competition with the Majestic Cinema (owned by the same company) and the Grand Cinema Palace.

Reportedly, the Adelaide Picture Hall closed on 1st February 1943 (see later). It was used as a depot by Pathé; became a Woolworth’s store; and is now an auto-parts shop (in the 1910 auditorium) and café (in the 1919 annex).

In KYB 1945 the legal owners are Union Cinemas but management is by Associated British Cinemas Ltd, 30/31 Golden Square, London W1.

KYB 1947 repeats the earlier information and adds that there are 624 seats. So, closure in 1943, mentioned in various sources (though originating with one?) is probably wrong.

However, KYB 1950 has no entry for the Adelaide Picture Hall, the name the cinema retained all its trading life.