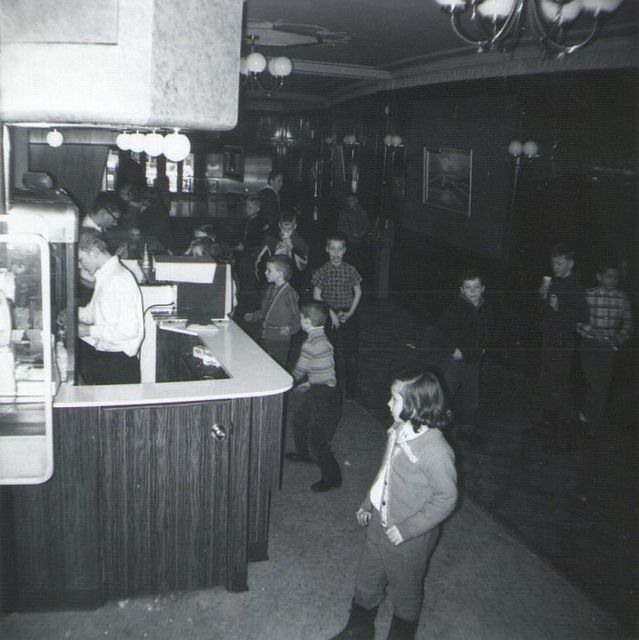 Located on S. Western Avenue at W. 63rd Street in the Marquette Manor neighborhood on the south side of Chicago.

The Highway Theatre would have been another unremarkable theatre built in the 1930’s except for the original murals on the wall. The original murals contained many transportion related themes including airplanes, ships, trucks and railroads.

In the early-1960’s, the Hiway Theatre was also used by the Chicago Savings and Loan Association on alternate Saturday mornings for a free show for local children. Parents had to stop at the S & L (a block away from the Hiway Theatre) to pickup the tickets.

When renovated in the mid-1960’s, the murals were painted over with an ghastly yellow paint. In the late-1960’s, the Hi-Way Theatre was converted to all adult move format. It was closed by 1991 and was demolished in 1996

I photographed the Hiway around 1989. From the looks of it, I’d say the theatre was built in the teens or early 20’s. At the time it was boarded up. It looked like a decent house, though certainly unremarkable. It also looked to be in decent repair. But then what are you going to do with aging cinema of no particular architectural merit, that is no longer profitable, in an outlying neighborhood of Chicago? Still it is a shame when something that was once a thriving community destination is abandoned.

As a teenager I worked in the Hiway in the 1960’s. I got to know the projectionist well enough that he let me run the show once in awhile (quite a feat considering how tight the union was). Behind the cinemascope screen was the original silent screen still on the back wall. I re-lamped the auditorium once, had to use a huge extension ladder to do the pillars on the walls. Inside the exit signs over the lobby doors were no longer used gas jets. I understand the organ was sold to a church for $100 years earlier.

“cinema of no particular architectural merit” I wanted to mention that as well as the old silent screen behind the cinemascope screen was a lot of fancy plaster work that could not be seen. The original silent screen was quite small and around it was plasterwork extending out to the exit doors on both sides of the cinemascope screen. The lobby had beautiful woodwork in it. Somewhere I have a couple pictures of the theater. If I find them I will post a link here.

Listed as the Hi-Way in the 1960 yellow pages, similar to the alternate spelling of the Belpark.

New link, besides the pictures, there is a short 8mm film clip driving by the Hi-way in the 60’s with the newer marquee.

That architecture looks a lot like the Portage on the Northwest Side.

Here is a THSA photo.

Here is a 1991 Chicago Reader article courtesy of Tim O'Neill, about the failed attempt to revive the Hi-Way as a performing art center. The Hi-Way was torn down about 5 years later.