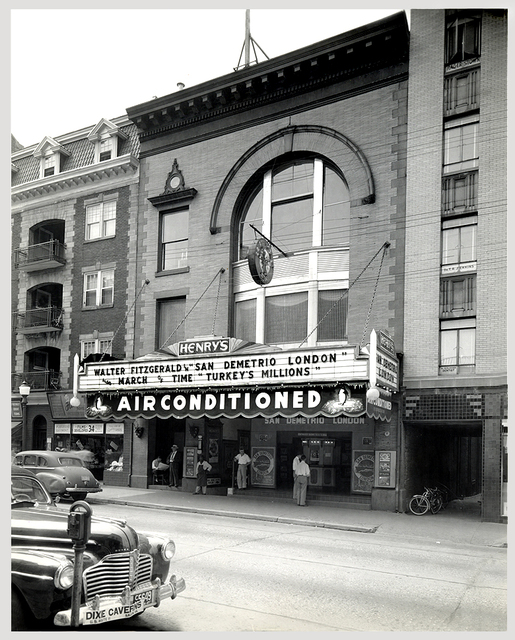 The theater was operated by the Elks for a short period of time in the 1920’s when the original operators (presumably) were financially unable to meet their rent. In the early 1930’s the theater was taken over by Mr. Henry Weinberg of Frederick, MD and renamed Henry’s Theatre.

Mr. Weinberg and his sister Clara Wachter operated the theatre until 1948 when it was purchased by my dad. Dad ran the theatre from 1948 until it closed on December 5, 1979. The last film played was “Fiddler on the Roof”.

The theater is currently owned by the City of Hagerstown as the result of a gift of the Groh Foundation. It is earmarked to become an arts center for students in the surrounding area. It is next door to the historic Maryland Theatre.

I grew up in H-town, and remember attending all the theatres mentioned on this website. I remember Mr. Miller (your father?) being my advisor for coin-collecting merit badge (Boy Scouts—Troop #4), and going to his office in the Henry’s for my advisement. I remember him taking a fantastic coin collection from the safe in the office, and showing me his coins!
Glenn Morrison
Washington, DC

Glenn,
Yes, John Miller is the son of John Miller Sr. and I am his daughter. Dad was an avid coin collector and was well known in the area for his appraisal skills of coins and currency. Thank you for sharing your memory with us. Dad passed away in 1991 at the age of 91. He is still very much missed by his children.
Carol Miller-Schultz

Here is some bad reporting from the Frederick Post, dated 12/21/51. I guess we’ll never know which marquee injured Mabel and Ethyl. Mabel’s husband, Mr. Haddock, later stated that something was fishy about the whole thing:

The marquee of a downtown theater broke from its holdings and crashed to the sidewalk today. Two persons were reported injured slightly. The movie was closed at the time. Pending further investigation, no one would say what caused the shelter over the sidewalk to drop. The city has had about 20 inches of snow since last Friday.

The fastening on the inboard side of the marquee held, so that the fallen shelter formed a sort of tent over the sidewalk. The two persons reported injured were identified as Mabel Haddock of Hagerstown and Ethyl Burgan of Funkstown.

REMEMBERING THE HENRYâ€™S â€" MORE OF THE HISTORY

The Palace Theatre prior had the notorious reputation of having rats scamper over the patronâ€™s feet in the theatre. In the early days of movies there was not a concessions area in the theatre. Most patrons would purchase a 5Â¢ bag of peanuts from the vendor located in the alley between the Ramaciotti Building and the theatre. The peanuts and a lack of sanitation resulted in the rats. When the theatre was taken over by the Elks it took several months of cleaning and extermination to get rid of the rodents.

In the early years the theatre would open at 10 a.m. and present movies continuously from 11 a.m. until 11 p.m. Continuous showings would permit a patron to gain admission at 10 a.m. and stay as long as they cared to (imagine trying that today!). Further, except for huge releases movies would change twice a week. A movie would play Sunday through Tuesday and be replaced with another on Wednesday through Saturday. Newsreels, short subjects and cartoons were almost always included in the program. There was little or no television back then â€" to see pictures of what was happening in the world thereby making the newsreel popular. Newsreels were changed twice a week or more frequently, depending on what was happening. An admission ticket could be purchased for less than a quarter (I have seen tickets that were priced as low as 11Â¢ – the admission price at the time the theatre close in 1979 was 75Â¢ for children 11 and under and $3 for adults). The movie was almost always a 2 hour presentation. The feature was populated with cartoons, short subjects and to a much lesser extent previews of coming attractions to achieve the desired running time.

In Hagerstown motion picture theatres were permitted to operate only Monday through Saturday. This was brought about by the â€œblue lawsâ€. In addition to the prohibition of movie exhibition on Sundays, stores were not permitted to offer certain types of products for sale. For several years between 1938 until the early 1940â€™s the theatres were dark on Sundays. Later a scheme was developed that circumvented the law but caused the theatre manager to receive a fine.

My dad told me how he would open the theatre on Sunday and purchase the first ticket, which would result in him being taken to City Hall to pay a $5 fine at the police station for violating the â€œno Sunday motion pictures lawâ€. The subsequent patrons on Sunday were not fined. This â€œgameâ€ lasted a few years until the archaic law was repealed.

In the early 1930’s the theater was taken over by Mr. Henry Weinberg of Frederick, MD and renamed Henry’s Theatre.

My dad had begun working in movie theatres as an usher at the Tivoli Theatre in Frederick, MD. The Tivoli was also owned by the Weinberg family. When Henry Weinberg decided to expand his interests to include the Palace Theatre in Hagerstown he contacted dad to become its manager. Dad was managing a large theatre in the Winchester area at the time. He agreed to become manager for the Weinberg family in 1938.

Back then there was a doorman to collect tickets. The Henryâ€™s had their infamous doorman Grover Cleveland Smith (a.k.a. â€œSmittyâ€) who would dress over-the-top in an elaborate uniform which included a captainâ€™s hat. There always was an usher on each aisle at the Henryâ€™s during the movie to maintain quiet and keep patrons from putting their feet on the backs of the seats. The ushers also wore uniforms (though less elaborate than â€œSmittyâ€™sâ€). Smitty was already in place at the Henryâ€™s when my dad came there in 1938. He was a fixture almost to the end; retiring in the late 60â€™s due to health issues. In the 1960â€™s there was an article about him in the local Herald-Mail papers.

Some notable facts: the Henry’s was one of the first theaters in Maryland to have magnetic four track stereo sound. When dad first arranged to have this added he had negotiated to have a new musical release to be the first film to be presented in stereo sound with the new sound system. The competing theatre change (Warnerâ€™s) did not offer stereo sound at that time (although, subsequently it was added). The Warner group somehow blocked the film from being show at the Henryâ€™s and played it in monaural sound at one of their theatres.

The other theatres in Hagerstown offered black patrons admission on the balcony only. The Maryland Theatre had a separate box office and entrance on the north side for black patrons. The black patrons could access the theatre balcony without co-mingling with the white patrons. The other theatres (Nixonâ€™s Academy and The Colonial) had similar restrictions â€" permitting black patrons only if they sat on the balcony. The Henryâ€™s had one level only and only admitted white patrons. After 1964 all theatres admitted all races and allowed them to sit where they like. This is not something I approve of (nor did my dad). It is appropriate for the purpose of history to include this information. (Google â€œJim Crow lawsâ€ for some other examples of racism and bigotry prior to civil rights).

Mr. Weinberg and his sister Clara Wachter operated the theatre until 1948 when it was purchased by my dad. Dad ran the theatre from 1948 until it closed on December 5, 1979. Following the closure of the Henryâ€™s the building has seen tenants such as a dinner theatre, Fleisherâ€™s Department Store and a boxing club. It is now the proud home of the Barbara Ingram School.

Please accept my invitation to a new web page dedicated to the memory of our theatre. www.henrystheatre.com there are three classic photos there and I hope to add more in the future. These were from my sister’s collection.

The Henry no longer exist.