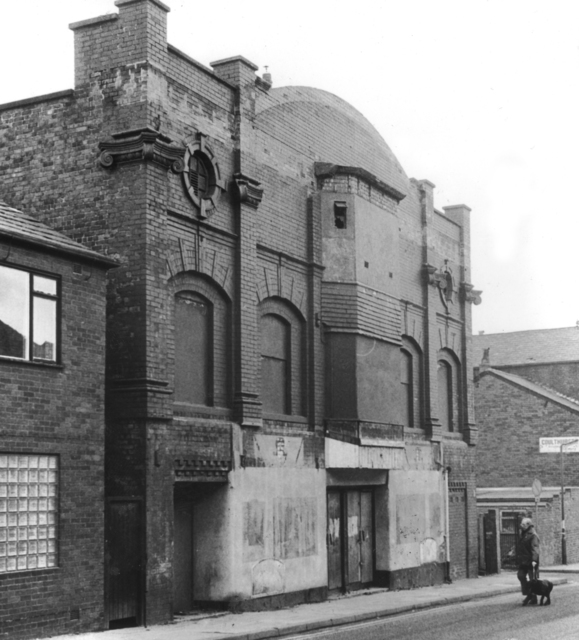 Located in Farnworth, to the south of Bolton, Lancashire. The Queens Theatre was opened in 1899, and Bioscope shows were part of the programming from the beginning. It was designed by architectural firm Bradshaw & Gass. It had a 28 feet wide proscenium, a 50 feet deep stage and eight dressing rooms.

In 1912 it was re-named New Queens Theatre and operated on a mixed programme of dramatic plays, music hall and varieties. From September 1922, it converted to full time cinema use.

In 1929 it was taken over by Mortimer Dent’s chain Standard Cinema Properties., and was re-named Ritz Cinema. It was equipped with a Western Electric(WE) sound system. In late-1935 it was sold to the James Brennan chain of cinemas.

By August 1937 it had been taken over by the Union Cinemas chain, who were taken over by Associated British Cinemas(ABC) in October 1937.

The Ritz Cinema was closed in May 1964 when it was damaged by fire, but repairs were carried out and it re-opened in October 1964, now known as the ABC.

From January 1969 it was leased to the Star Cinemas chain, and it was re-named Studio 1. Soon part-time bingo was introduced, and the Studio 1 was closed on 30th October 1971, and became a Star Bingo Club. It was demolished by 1993.