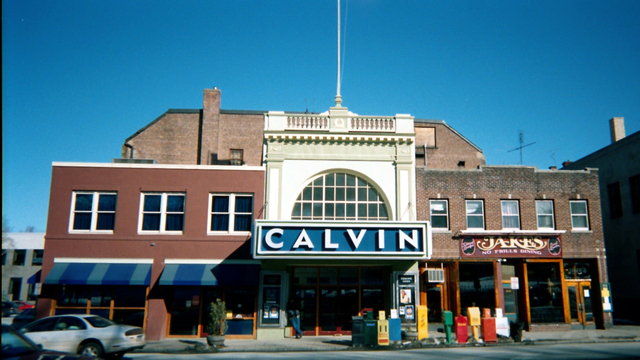 Once the largest movie theatre in Northampton, Massachusetts, the Calvin Theatre was the home of first run films for almost 70 years. It opened in May 1924.

With the arrival of megaplexes in nearby Hadley, the Calvin Theatre struggled to survive second rate film bookings and large overhead. Although Wednesday dollar nights drew crowds, little else did.

Finally, in 1994, the Calvin Theatre quietly put up a sign stating it was closed, at least temporarily. For months, a sun-bleached poster of the Jack Nicholson - Michelle Pfeiffer film “Wolf” drooped sadly in the lightbox of the theatre’s exterior. The Calvin Theatre had gone dark.

A shining knight saw the Calvin Theatre’s potential and bought and renovated the classic theatre. Now housing mostly live performances, the Calvin Theatre does occasionally show first and second run films. The Calvin Theatre, with its new, polished marquee and facade, is back from the brink.

The restoration of the auditorium was very well done. Unusual color scheme (yellow & gold primarily with various muted shades of green & white trim, but a whole lot better than the original appearance, and the color scheme extended to the formerly all dark brown ceiling. The place is certainly brightened up! The first thing i saw entering the outer lobby was they removed the drop ceiling of the 1960s, revealing the former two-story lobby ceiling which had been hidden for decades.

Nathan Goldstein had renovated the lobby areas in the early 1980s, and actually did a very good job – the walls were painted with cream color paint that must have had mica mixed in because the walls literally sparkeled (it was muted and tasteful, not ostentatious) – it really looked nice and I wish they had kept that effect in the latest renovation. But they still did a great job.

The Calvin showed 2nd run movies as far back as I could remember (1970s – of course all theatres in Amherst/Northampton were 2nd run in those days), and remained 2nd run when the Hadley malls finally became 1st run. Although they did get a 1st run of Star Trek: the Motion picture in 1979 (originally was to be the exclusive booking in the area but the malls got it too). This drew some good crowds – in the 600-700 range – but still not enough for them to open the balcony. I had to wait until 1980 and an arlo guthrie concert to get upstairs (still had seats from the 1930s up there!) When they started showing occasional concerts in the early 1980s it was reported that until the end stage had been unused since the 1920s.

Before ther renovation, it was mostly cream color and the wall columns had blue background with dingy gold paint sloppily applied over the decorative motifs (vines and fruit, a simpler version of some decorations at the wonderful Wang (nee Metropolitan) theatre in Boston, MA. ) The ceiling was a dark marblized brown color. The areas between the columns had square accoustic tiling in a nice harlqeuin (read tilted 45 degrees) pattern going up about a third of the way, which I (in my architectural ignorance of 20 years ago) assumed had been original with possibly damask fabric above (which actually wouldn’t look that bad – the walls are a little bare now).

Just saw an interior photo of the restoration. The theatre looks beautiful.

The photo is from 1976 since that is the date the movie on the marquee was released.

There are 2 movie theaters listed under Northampton in the 1927 Film Daily Yearbook. One is the Academy and the other is the “Coolidge” with 1000 seats and open daily. I guess that the Coolidge is actually the Calvin.

I was never here for a movie but it is a great concert venue. They filled in the orchestra pit and add additional seating for some concerts. For the more rock and roll concerts they use the front space as a dance floor.
The theatre is really lovely, with wood paneling throughout much of the house. It does seem to have a roof problem now. There is some water damage to the plaster in a few places. It seems to be very heavily booked and I hope they can fix it before the damage becomes extensive.

The May 10, 1924, issue of The Moving Picture World had a great deal to say about the new Calvin Theatre in Northampton:

“The newly-opened Calvin Theatre, Northampton, Mass., owned by Goldstein Brothers, is one of the best appointed and most modern houses in New England, and when its beautiful lighting effects are brought into play, especially the crimson-hued lattice-work lights, in addition to the purple-crimson crystal chandeliers, the effect is one of exquisite beauty. The color scheme of the theatre is old gold and grey. The scenic decorations about the theatre are the work of the William Eckart studios of New York. The auditorium ceiling, the work of Charles Stifter, noted New York sculptor, is of ornamental plaster, embellished with striking decorative effects.

“The theatre is located in King street at Merrick lane and the building opens free on all sides. It has a majestic approach and is visible for a long distance.

“The foundation of the building is of reinforced concrete; the roof of steel construction and the walls of brick.

“The entrance to the new Calvin is imposing, and its arch, when illuminated, is well silhouetted against the city’s night skyline.

“There is a marquise of special design with electric lights arranged on a flasher motor. The outer vestibule is of terrazzo and marble and contains poster and photograph display frames, especially constructed. The box office is in the center of the vestibule and is of marble with hand carved woodwork. It is equipped with two automatic ticket sellers.

“From the vestibule entering the lobby on the left side is an additional ticket office, which can be used in case of reserved seat sales in advance of the shows.

“The mezzanine floor also is of excellent construction, being of California gum-wood. Here are located the well-appointed women’s and men’s retiring rooms, private telephone booths, check rooms and manager’s office. The mezzanine lounge has drinking fountains and writing facilities and a true home-like atmosphere prevails there.

“More than 200 tons of steel alone were fabricated into the construction of the balcony. There are no posts and an unobstructed view is had of the stage from all seats on both floors.

“The Calvin has a 40-foot stage and proscenium opening 36 feet in length and 25 feet high. The stage is of ample size to accommodate any sort of road show.

“Many of the leading manufacturers of theatrical stage equipment were called upon by the Goldstein Brothers to make installations on the Calvin’s stage. The Worcester Electric and Manufacturing Company built the large stage switchboard, which is of the dead front type.

“The scenery for the Calvin was built by James Kennedy, who has charge of the Goldstein Brothers' scenic studios in Holyoke. Maurice Tuttle, scenic artist for the circuit, acted in that capacity for the Calvin and has turned out a veritable work of art. The main drop curtain has upon it a beautiful Yosemite Valley scene. It was executed from an enlarged photograph of an actual scene.”

I was the manager of the Calvin in the early ‘80’s. It was great! Dollar house, double features:(“Deliverance” & “Porky’s”: “Squeal like a pig” read the marquee.) We did the best we could with renovations, but there was no money… Great memories…

I wanted to ask Nicholas Thaw while working at Calvin theater if he had any supernatural experiences? I ask because I was there this past Saturday night to see Johnny Lang and was sitting by myself in the sixth row and something tap me on the shoulder three times and I turned around and nobody was there. It quite strange indeed. Btw, Jonny Lang and gang were absolutely fantastic. Thanks for bringing them to North Hampton!